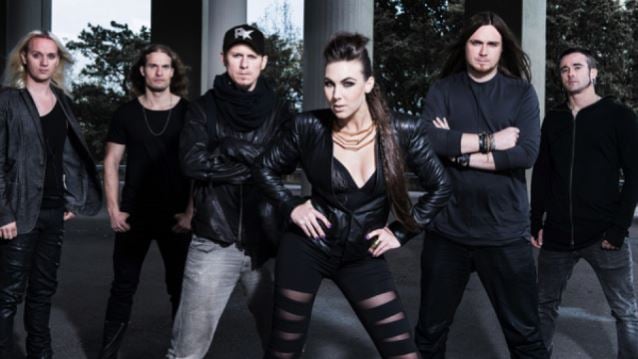 Singer Elize Ryd and guitarist Olof Mörck of Swedish metallers AMARANTHE recently spoke to We Love Metal about the band's plans to record the follow-up to 2014's "Massive Addictive" album. Elize said: "We haven't started [the actual songwriting process] yet. We are just recording on our iPhones, the ideas that we get. And, of course, we're thinking about the theme — like, how do we wanna develop from the last album? And I think that we kind of already know how we want it to sound. So the goal is to, after this tour, go straight back home and do the actual songwriting, like start to make it for real. And [in 2016], we're gonna record the album. So we're in the process [of thinking about it], all the time — day and night, unconscious and conscious. [Laughs]"

Ryd also confirmed AMARANTHE's plans to make a concert DVD but cautioned that it may take some time for the set to arrive. She said: "Our goal is to definitely record a live DVD, but we have so huge ideas, so we are not able to make it a reality yet. I don't know if it's gonna take another one or two or three or four years, but that's one of the things I'm personally looking most forward to."

AMARANTHE recently returned to the U.S. on a headline tour with BUTCHER BABIES in tow.