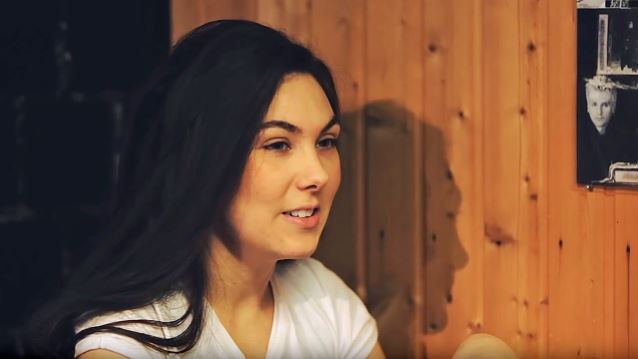 Sebastiano Mereu of From Hero To Zero recently conducted an interview with singer Elize Ryd of Swedish melodic metallers AMARANTHE. You can watch the chat below. A couple of excerpts follow (transcribed by BLABBERMOUTH.NET).

On the differences in being an artist 15 years ago versus in 2016:

Elize: "That's a very interesting question. I educated myself to become a musical artist because I didn't want to live my life without singing, dancing, and acting. I worked the hard way, so to speak. I paid for a very expensive education just to make sure I would always be doing this. Then in my free time, I had my male friends who were metal musicians and we wrote songs just mostly for my side, it was for fun because I love to write music. I like to create. That's the only negative thing I thought about the music industry is that I would always sing someone else's songs, or play a character. But, now since we started the band, I had to find myself and see who I am. What kind of artist am I? What difference can I make with my songs? What kind of difference as a woman in the metal industry? That was most tempting from my perspective and not choose the way people thought I would [go]. Some of my old friends were, like, 'But you're so great, you could be a big pop star. Why didn't you go that way? Why are you doing this? It's not as big as if you were the new Christina Aguilera.' I was, like, 'That's not the most important thing.' For me, it was to make a statement and choose a living that makes you feel important. I thought that I'm important here. The difference is that in the beginning, I got a lot of comments about being the only female in the band and just in general being a girl in the metal/rock business. What changed the most, is that nowadays, it's now more natural. Almost nobody speaks about it anymore."

On the evolution of female singers in metal:

Elize: "I think it's a natural evolution because it just popped up in so many bands with female artists. We got so many questions and we answered them all. There's not so much mystery about us anymore. There's nothing strange about being a woman in metal anymore. There is also big support, like tonight, there are 650 pre-sales. It shows there is an audience and I think that's respect."

On her early musical ambitions:

Elize: "The plan was to work full-time as long as I could, and then I was doing auditions for operas, like big operas. I went very far in some of them. I was still very young, though. I didn't have much experience. Besides that, I always wanted to have a record deal. That was my biggest dream. I wanted to release the songs I've been writing. So you could say I wanted to be a singer/songwriter, but I always loved so many different genres, so it was very hard for me to decide which way to go. I listen to Aretha Franklin, Eva Cassidy, and some metal, of course. The plan was to be a solo artist, but I needed musicians. So that's when I found Olof [Mörck, guitar] and he and his friends arranged the songs I wrote. But it turned out, we started his band instead. When we put up the songs on MySpace, we got a lot of feedback from managers and record labels. So it was, like, 'Let's try this for a while, then I could do my own thing.' What I did lately was guest things to satisfy all the parts in me. I like a lot of different music, so it makes me feel satisfied. Also, it's really fun to help others and collaborate with other people, I really like that. I guess that comes from being used to working with a lot of different people."

On the differences between crowdfunding and having record label support:

Elize: "Having a label is good from the perspective they can make a plan. The label has offices all over the world and when they say, 'Go!' everybody releases the album on the same date. Japan, United States, Europe, Sweden, Finland, everywhere, it comes out on the same day. They have a force, their partners they always work with and they have a lot of power to promote the product. Of course, that costs most, I think. That's what is the most expensive, to promote. If we were to do crowdfunding, I guess the difference would be is that it wouldn't be a buzz about us releasing the album. The people we have, though, the fans on our pages, like social media, they would be aware of it. I have been checking out this PledgeMusic thing. I don't know how it works, but it seems like a good thing. I thought about working with them to release a solo album."

On her use of social media to promote AMARANTHE:

Elize: "I don't use it so much. I just put it out to inform people, like, 'Now the album is out.' I don't use it to promote. I think it's more important to show myself more than showing my products. That's how I see it. I think a lot of pages are not so personal anymore. It's mostly commercial and it shows a fake world. I want people to see the real deal."

On if social media is a "necessary evil" for artists:

Elize: "I grew up without it. I always thought it didn't matter. Then it became more popular and people were asking, 'Do you have a lot of followers?' You can do so many things. You can ask for sponsorships, but it feels like cheating to me. It's because I'm old-school. I grew up without these things. I should if I'm a business-minded person. I should think that it's a great opportunity and a great way to promote your music and art."