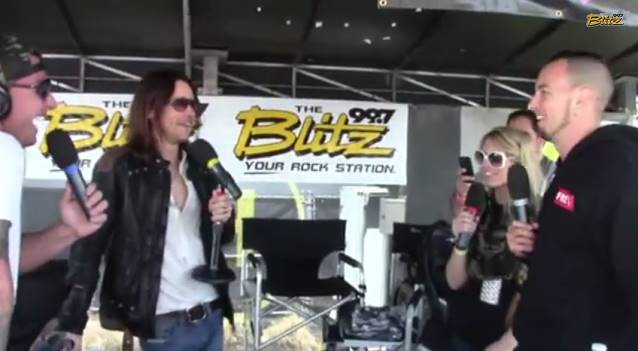 Loper and Randi of 99.7 The Blitz radio station conducted an interview with Mark Tremonti and Myles Kennedy of ALTER BRIDGE at this year's Rock On The Range festival, which was held May 16-18 at the Columbus Crew Stadium in Columbus, Ohio. You can now watch the chat below.

ALTER BRIDGE will release a new live CD, DVD and Blu-ray entitled "Live In Milan" in early June. The show was taped at the legendary Mediolanum Forum in Milan, Italy on November 12, 2013 in front of a sold-out crowd of over 10,000 fans. Shot in beautiful HD with 18 cameras and directed by award-winning filmmaker and longtime ALTER BRIDGE director Daniel E. Catullo III, the show includes 18 songs off all four of the band's studio albums. One of the tracks, an acoustic rendition of the ALTER BRIDGE song "Watch Over You", features a special guest appearance by HALESTORM's Lzzy Hale.