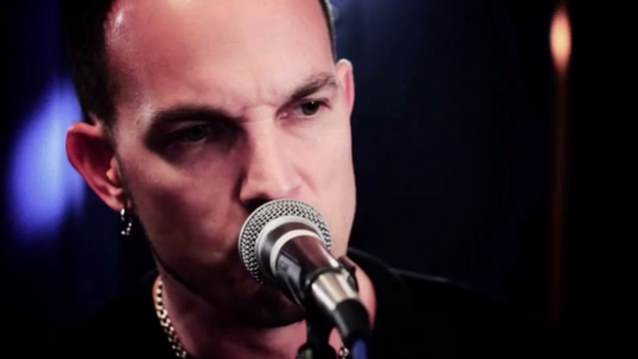 According to The Pulse Of Radio, ALTER BRIDGE and CREED guitarist Mark Tremonti will start work on his second solo album later this year. Tremonti told Classic Rock that he has 10 songs already written for the new disc, which will follow up 2012's "All I Was". Tremonti explained, "I'm working on that now. I've got about 10 songs ready for pre-production. Slash and Myles [Kennedy, ALTER BRIDGE singer] are going out with AEROSMITH in July and August, so I'll take that time to get back into writing more. Then we'll go back on tour with ALTER BRIDGE in September and October and later his year we'll finish up tracking the new TREMONTI record."

Tremonti added that VAN HALEN bassist Wolfgang Van Halen, who joined Tremonti's solo band for touring purposes after ALTER BRIDGE bassist Brian Marshall dropped off the project, is expected to both record and tour with TREMONTI for any future projects.

With ALTER BRIDGE and CREED both still active, The Pulse Of Radio asked Tremonti a while back how he knows which songs are right for each project. "I've just gotten this filter, this intuition that tells me what songs go to which band, and with my solo stuff, the rhythm section is so different from the other bands, I think it really stands apart," he said. "I think it's a little more aggressive than both the other bands."

Tremonti recorded "All I Was" using ideas rejected by his ALTER BRIDGE bandmates, who felt some of the material was too "speed metal" for their sound. Tremonti revealed, "I tried it with them about 10 times and it would never stick. I didn't want those ideas to go to waste . . . Now it's a living, breathing band so we gotta keep it going."

ALTER BRIDGE performs this weekend at Columbus, Ohio's Rock On The Range festival before heading out on a European tour later this month.