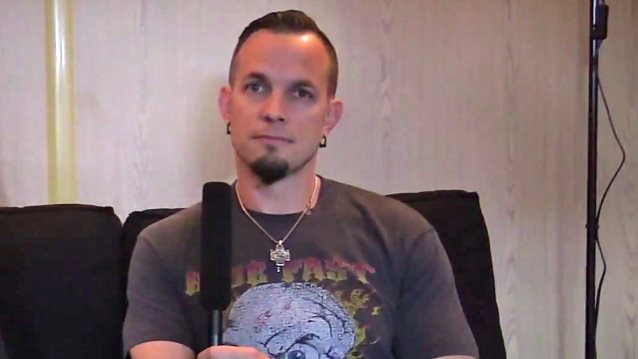 StudioAMB conducted an interview with ALTER BRIDGE guitarist Mark Tremonti at this year's Sweden Rock Festival, which was held June 7-10 in Sölvesborg, Sweden. You can watch the full chat below. A few excerpts follow (transcribed by BLABBERMOUTH.NET).

Mark: "We've been at it for a long time. We've been touring for, I don't know, 15 years or something with ALTER BRIDGE and over 20 years total with both [Tremonti's previous band] CREED and ALTER BRIDGE. So it's [about] just working hard, trying to make each record better than the last and putting out the best live music you can and putting in a lot of time on the road so people become familiar with what you do."

On the regular challenges he faces while being in ALTER BRIDGE:

Mark: "The hardest challenges are being away from family on any given day. That's the worst, but I have them fly out here, I fly home, so I try not to go two weeks without seeing them. That's the toughest thing. This is my job, this is my passion and having kids is more important than any of that stuff. Me and my kids' time is crucial. I get them out here as much as I can."

On whether he's had to deal with any conflicts while in ALTER BRIDGE:

On his advice to younger bands when dealing with conflict:

Mark: "Just make sure you are dealing with people that you agree with their morals and the type of person they are because if even they are the best musician, there are other great musicians out there. The core personalities have to really mesh and if you have one bad seed in there, it can ruin the band. You don't want it to happen three years later when you have some success. You want to nip it in the butt right off the bat."

On how young bands should deal with the changes within the music industry:

Mark: "Nowadays, put your music up on YouTube, Facebook, everywhere you can. Every chance you get. I get stuff tweeted at me, 'Check out my band's cover of this song.' Tweet it at everybody, use social networking to its fullest. It's a much different world than when we came out. In my early days, I would say try to get your song on the radio. It's next to impossible nowadays unless you have a record label. Try to get a record deal first. Sometimes record deals don't work out, so just write great songs. If the song is good enough, it's going to make its way through somehow, I would think. If it's a great song, you can knock down all kinds of walls in your way."

On whether maintaining a consistent band image is important:

Mark: "I never thought of the image thing. It was always about the music. I think pop stars have to be more worried [about that]. But don't do anything you're going to be embarrassed about four years from now. You're going to look back on old stuff and sometimes you'll have skeletons in your closet. There's a picture I did years' back where the photographer asked us all to take our shirts off. [Laughs] It's an embarrassing, horrible picture that I wish was never around, but we were young and impressionable and we did it, so don't do things like that."

ALTER BRIDGE will release of a new live album and rarities collection, "Live At The O2 Arena + Rarities", on September 8 via Napalm.