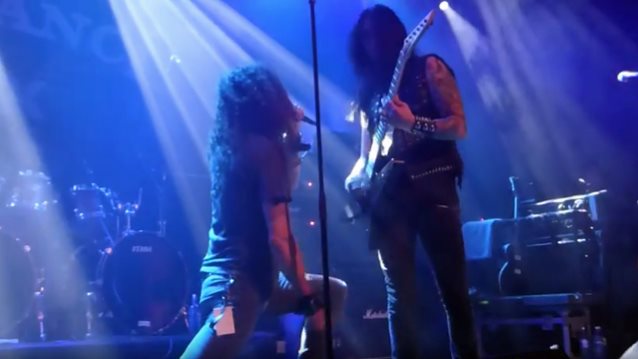 Fan-filmed video footage of ALLEGIANCE OF ROCK's May 7 performance at the Stockholm Rocks festival at Debaser Medis in Stockholm, Sweden can be seen below.

Stockholm Rocks marked the first-ever appearance by ALLEGIANCE OF ROCK, which performs songs from the past, present and future of the bandmembers' own back catalogues and more.

In an interview with Hardrock Haven, Gus stated about his collaboration with Mats: "I met him in 2003 at a festival in Sweden where he was playing with . And I'm bit a fan of him since he saw on Yngwie Malmsteen's 'Facing The Animal'. So we met there and had a great time. And we became buddies through the years and jammed together. We always stayed in touch. And he's the guy whose I always wanted to do something with. And in 2010, I asked him to join FIREWIND because our singer couldn't come on tour with us. Mats has the advantage to be not only a singer but a songwriter and producer too."