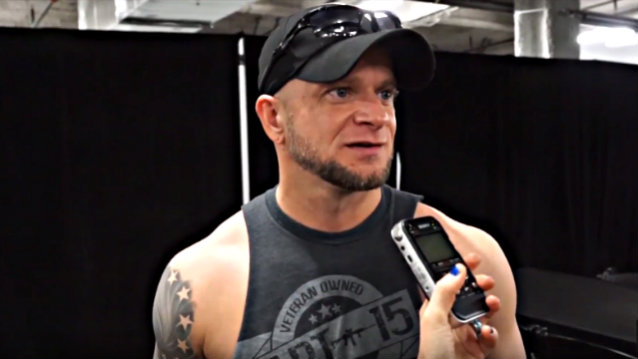 Phil Labonte says that ALL THAT REMAINS has tried to take some chances with its eighth studio album, "Madness", which will be released on April 28 via Eleven Seven Music in Europe and Razor & Tie in the U.S. "It's pushing the boundaries," the singer told ROCKwell UnScene at this past weekend's Las Rageous festival in Las Vegas, Nevada (see video below). "It's pushing the boundaries of what people expect from ALL THAT REMAINS, it's pushing the boundaries of what is 'acceptable' for a metal band. We really tried to do something that was different from what we've done historically and different from what other bands are doing. A lot of bands throw together a bunch of riffs, and they're, like, 'That's a song.' And we kind of didn't wanna look at it like that. We wanted to have some really dynamic stuff in there and some songs that really take you on a journey. And hopefully people feel that way when they listen to it."

Labonte also once again defended ALL THAT REMAINS over "sellout" accusations that have been leveled at the band over the more radio-friendly sound of the new album's title track and first single, "Madness". "There's definitely some stuff [on the disc] that's really gonna kick you in the nuts. I mean, the record opens with a song called 'Safe House', which some people might have heard on the Internet; it's available now. And there's no intro, there's no nothing — right from the get-go, it starts with double-bass [drumming] and riffing and then progresses through the rest of the record, and it takes you on a journey. And every song is a little bit different stylistically, I think, or most of the songs have their own kind of character, as opposed to some bands or records, [where] you're getting the same song, or a similar song, over and over, staying right in between the lines."

He continued: "When I was a kid and I had a coloring book, that's how you color. [Motions up and down with his hand] [Laughs] The lines are suggestions. And that's the way we approach writing songs, writing music. It's what we wanna do."

"Madness" was recorded at West Valley Studios in Woodland Hills, California with producer Howard Benson, who has previously worked with such acts as MOTÖRHEAD, PAPA ROACH, THREE DAYS GRACE, FLYLEAF, P.O.D. and HALESTORM.