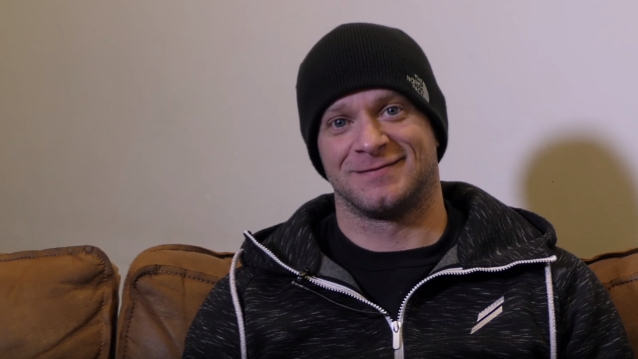 Prior to ALL THAT REMAINS' performance in Amsterdam on December 19, vocalist Phil Labonte spoke with FaceCulture. The two-part conversation can be seen in full below. A few excerpts follow (as transcribed by BLABBERMOUTH.NET).

On deciding to pursue music as a career path:

Phil: "Some people have an epiphany, or some people have a moment, that they can say, 'Oh, I knew this was for me.' I think that I thought that I would always play in a band. It took me a long time to think that that's all I would do for a living. Playing heavy music like we do, it didn't seem like it was realistic to only play in a band for a living. I'm incredibly fortunate to be able to do this, so it was something that over time, I was kind of, like, 'Maybe this is actually real?' The last time I had a regular day job, I think, was in 2004, and I didn't feel, like, 'Wow, this is actually a career,' probably until 2008-2009. I don't think that there was a moment where I was, like, 'Wow, this is what I'm going to do.' It kind of happened, and then I was like 'Holy cow — this is what I'm doing.'"

On what he enjoys about being a professional musician:

Phil: "I'm the guy that likes playing shows. There are some artists that really enjoy the studio time; some artists really enjoy the creative process. For me, those tend to be stressful. Oftentimes, it's hard for me to write lyrics, because my lyrics tend to be really personal, and they're always about things that have happened. We make jokes about it in the band that I write my best stuff when I'm miserable, so it's not always something that I'm looking forward to, but performing and seeing that something that I've gone through has either helped people, or they can relate to it, that's the real payoff for me — that affirmation from other people saying, 'I understand what you're saying. I've been there, and I appreciate you writing this song and telling me that I'm not the only person that's felt like that.'"

On the artists that inspired him as a songwriter:

Phil: "Lyrically, all the stuff that really always hit me tended to be not metal. I was, and still am, a big fan of Sarah McLachlan. 'Fumbling Towards Ecstasy' really hit me because she was so vulnerable, and you could hear the honesty in her music. When I was really starting become a lyricist and really starting to dive into it and learn how to write stuff that mattered, I was really into the Lilith Fair scene... The honesty in the lyrics that a lot of female artists wrote really hit me, and that's kind of what inspired me to be honest in writing lyrics. Before that, I didn't feel like I wrote anything that was cool. Bands like IRON MAIDEN, I use them as an example a lot. Steve Harris and Bruce Dickinson can really craft a song that's compelling about a historical event. I don't feel like I can write something that is meaningful or people will really relate to or understand if I'm trying to write about an event. Usually, I feel like the band's right — my best stuff comes out when I'm miserable... I've definitely taken heat for it, because of the macho stuff that's associated with [metal]. When you write songs about your own personal vulnerability, there are people that are going to attack you for it and call you names and mock you. [shrugs] It's worked out well for us, though, so it doesn't much matter. If people don't like the song 'What If I Was Nothing' or people don't like the lyrics – tough guys don't like it – tough shit, because there's a lot of people that do. It's never been something that I've been apprehensive about, thankfully."

On what he learned during ALL THAT REMAINS's early tours:

Phil: "I think that I learned that I was more determined than I thought I was. It's easy to say that you're determined. It's easy to talk — it's easy to say, 'I would do this' or 'I wouldn't do that' when you don't have to do it — but to quit your job and get in a van with no promise of success, no promise of anything except for you know you've got a month of shows booked, and hopefully, the next month you'll have another month of shows booked, or soon after... I think that's when I realized that a lot of life is just going and putting the effort in to really do something, whatever it may be."

On the group's new album, "Victim Of The New Disease":

Phil: "I feel like we try to put out the best music that we can that represents where we are. I think that if you don't focus on trying to continually better yourself and expand what you do, you run the risk of becoming stagnant... We did talk about what we wanted the record to sound like. [Previous album] 'Madness' was the least heavy record we'd ever done, and we like to throw curveballs. We like to keep people kind of guessing as to what we're going to do, for good or bad. We sat down and had a conversation and we were like, 'We haven't done a really heavy record probably since...' In my opinion, the last really heavy record we had done was probably 2010's 'For We Are Many'. It had been a while since we really kind of focused on writing heavy stuff, so we said, 'Let's put out a record that's mostly heavy.' That was why we had gone to work with Dan Laskiewicz, who used to be in THE ACACIA STRAIN... We did, like, five demos, and once we finished the demos, we were, like, 'This is really going well.' We liked the way they were turning out and we liked the way that it felt, so we decided, 'Let's just finish the record right now. The demos are good — let's just go ahead and write a few more songs, and we'll be done with it.'"

Phil: "For the most part, if you write a good song, the genre doesn't matter, which is why you see so many R&B and country artists recording the same song. Look at it like a cook — you've got a really good cut of meat. It doesn't matter how you prepare it; it's a good cut of meat. That, to me, is what a song is. It doesn't matter if it's a country song or an R&B song or a lot of times even rock songs — they're very interchangeable. That's why you see so many rock artists covering songs that were country songs — we've done that — and the important part first is that it's a good song. Whether the guitars have distortion or whether there's a guitar solo, that's like garnish or spices. the other stuff is cool and might add to it, but if you've got a really good song in the first place, then 90 percent of your work is done."

"Victim Of The New Disease" was released on November 9 via Fearless in North America and Eleven Seven in Europe.

ALL THAT REMAINS recently completed a European tour, their first since the October death of guitarist Oli Herbert. The band was joined on the tour by YouTube personality Jason Richardson (ALL SHALL PERISH, CHELSEA GRIN, BORN OF OSIRIS).

ALL THAT REMAINS has released nine studio albums and a live CD/DVD that have sold more than one million copies worldwide.