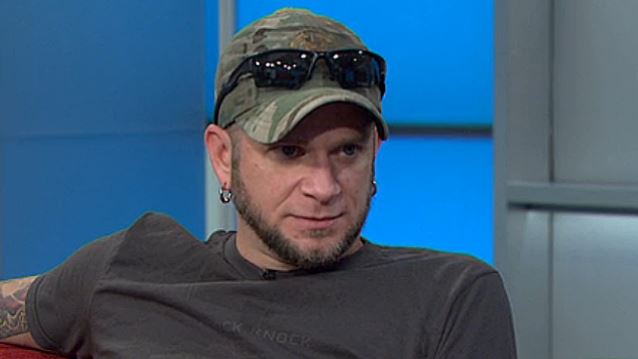 ALL THAT REMAINS frontman Phil Labonte appeared on yesterday's (Tuesday, February 3) edition of the MSNBC program "The Docket" to debate what is — and is not — offensive under the Freedom Of Speech umbrella with attorney and legal analyst Seema Iyer. You can watch video footage of his appearance below.

Labonte recently made headlines when he addressed his use of a homophobic slur nearly a decade ago in an interview with Revolver magazine and suggesting that the obstacles faced by the lesbian/gay/bisexual/transgender (LGBT) community do not equal those experienced by the black community.

After mentioning his 2005 use of the word "f**got" on a DVD, Labonte said, "I have nothing against gay people. It's just a word… I think the only people that have a legit grievance when it comes to any racial slurs is the black community." Adding that he was not trying the "minimize" the plight of the LGBT community, he continued that "homosexuals were never property," and that even though they have "had a rough time," the "black community has a whole lot more room to be upset about a word than the LGBT community."

Asked by Iyer to clarify his remarks, Labonte said: "I think the African-American community in the U.S. has… I mean, first there was slavery, then it's Jim Crow, and still today, our prisons are full of black and brown people. So there's significant social problems for the black community."

After admitting that he was using the "f**got" word primarily "to stir the pot, to piss people off," Labonte said: "People are gonna be offended, but you can't control what offends someone, because one thing will offend one person and it won't offend another, so there's no litmus test."

He continued: "I think that if you're gonna ban things, or if, socially, things are unacceptable because they're too offensive, then you end up with things like the Charlie Hebdo attack. You end up with people saying, 'You said this, so now I'm empowered to enact a violent response because of a word.' And saying a word is not wrong.

"In a Christian household, if you were to say curse words and say '[Expletive] Jesus Christ,' or whatever, these things are very offensive to a Christian. I don't think they're offensive at all to me… [But] just because I'm not gay or black doesn't mean that I should be excluded from having any kind of comment on society or social [issues]."

Labonte further defended his use of a homophobic slur, insisting that political correctness and the culture of victimhood have become too pervasive.

"It all depends on the person viewing it," Labonte said. "'Piss Christ' [a 1987 photograph by the American artist and photographer Andres Serrano depicting a small plastic crucifix submerged in a glass of the artist's urine], that thing horrified Christians. I could give a crap. I don't care. And I was raised a Catholic. I'm an atheist now, but I was raised Catholic. I don't care that some dude put a picture of Jesus in a bottle of pee. Who cares?"

Phil also defended his right to use language that others, particularly homosexuals, deemed offensive. He said: "I'm the kind of person… I don't look like the rock star, I'm not the guy with all the jewelry and the long hair. I'm who I am and there's times when I'm gonna say things that are offensive, and that's just the way it is. But I don't believe… Or at least for me personally, I don't wanna try to be something I'm not. And if I'm offensive, well, you know what?! I'm offensive. But I'm me."

Labonte used the slur again in 2011, this time directing it at BLACK VEIL BRIDES vocalist Andy Biersack. Labonte addressed the backlash on Facebook and Twitter.

ALL THAT REMAINS will release its seventh studio album, "The Order Of Things", on February 24. The first single is called "This Probably Won't End Well".