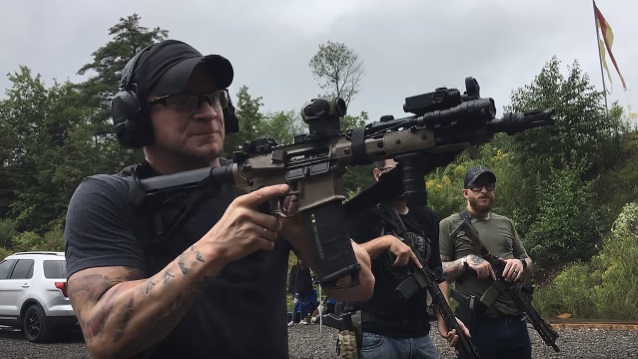 ALL THAT REMAINS frontman Phil Labonte has uploaded a five-minute video in which he details the guns he thinks "you 'need' if you're a gun person." Check out the clip below.

Labonte made headlines last month when he weighed in on the gun control debate less than a week after a school shooting in Florida left 14 students and three teachers dead.

Phil, a staunch gun-rights advocate posted his controversial view in a seven-minute video on YouTube. Talking about how people want something done, he said: [If] you wanna ban a certain type of gun, it's not gonna fix anything, it's not gonna stop the problems that we have with people attacking soft-target schools and stuff."

The vocalist stated about the massacre in Florida: "One of the things that drives me nuts about it is everything failed. The FBI failed, and there was a police officer who was armed on the campus. He wasn't there. The kid got his guns legally. What do you do when everything goes wrong?"

The singer has been outspoken on the subject before and went on to say: "I'm not a fan of the Patriot Act. I don't like the NSA spying. I don't like the idea of the federal government being able to just snatch up people without due process. And I don't think that empowering the government to just confiscate guns 'just because' is a good idea."

Labonte in 2012 penned his own op-ed piece for Alternative Press supporting the Second Amendment rights of Americans to bear arms. He wrote at the time: "The Second Amendment is a right that was given to us to prevent the federal government from becoming tyrannical. Proponents of gun control would do well to learn the history of gun control and the terrible tragedies that often follow the disarming of a population."