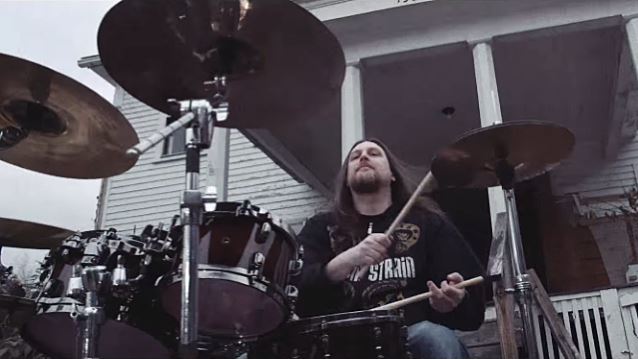 According to The Pulse Of Radio, ALL THAT REMAINS drummer Jason Costa has to take a short break from the band after suffering a dental injury onstage.

WHITECHAPEL drummer Ben Harclerode will play in his stead while Costa recovers.

Says Costa: "A few days ago at a show in Virginia, a part of a stick that broke off of my snare shot up and hit me in the mouth. This resulted in a cracked crown. I hung in there for a couple of shows, but then it became a pretty big problem. In a few days I'll have a small procedure done and I'll be joining back up with the tour again. Until then, we have the masterful Ben Harclerode from WHITECHAPEL filling in on the drums!"

ALL THAT REMAINS is continuing to tour in support of its new album, "The Order Of Things", which was released on February 24 via Razor & Tie. The CD follows up the group's 2012 effort, "A War You Cannot Win", which featured the massive rock singles "What If I Was Nothing" and the chart-topping "Stand Up".

The new disc marks the first time that singer Phil Labonte collaborated on his lyrics, in this case with producer Josh Wilbur. Labonte told The Pulse Of Radio how that worked out. "He's the first guy that I collaborated lyrically with," he said. "It's always been a situation where we'll come up with vocal ideas, maybe cadences, and I'll come up with the ideas and words that go into it. So this record has really been vocally the most collaboration I've ever had from a producer/writer, working with, you know, the songs we came up with."