Massachusetts metallers ALL THAT REMAINS will embark on a U.S. tour at the end of April. The band will be supporting its eighth studio album, "Madness", which is due out on April 28. The effort was recorded at West Valley Studios in Woodland Hills, California with producer Howard Benson, who has previously worked with such acts as MOTÖRHEAD, PAPA ROACH, THREE DAYS GRACE, FLYLEAF, P.O.D. and HALESTORM.

Vocalist Phil Labonte told Revolver magazine about ALL THAT REMAINS's approach on the new disc: "We wanted to mix it up a little bit and write from a vocal perspective this time. So I went to L.A. and came up with vocal ideas and melodies and then sent those chord progressions back to Oli and he wrote riffs in response to that. [Doing it this way] turned the record into a vocal album as opposed to a guitar album. And that affected some things. Like, there might be less intricacy in the riffs because they were written in response to my voice."

Asked by Ryan Daniels of of Rock 105.5, Carolina's Pure Rock radio station, about the "sellout" accusations that have been leveled at ALL THAT REMAINS for the more radio-friendly sound of "Madness", Labonte said: "If you're doing something — making music — and specifically catering to an audience that you have catered to or that has found something to attach to, is it a sellout to try and change and do something different? Or is it a sellout to be, like, 'Okay, this is the safe play where I know I can make my money?' It's, like, I know I that I can cater to this narrow group of people, and if we don't stray, these people will keep buying our records, these people will keep coming to our shows. Is it a sellout to be, like, 'I'm gonna try something different?'"

Labonte also stressed that fans of the more aggressive ALL THAT REMAINS material have plenty to look forward to on the follow-up to 2015's "The Order Of Things". "People forget that every single record ALL THAT REMAINS puts out has heavy stuff on it," he explained. "It's, like, people focus on the stuff that's not as heavy, but every record. I mean, on 'The Order Of Things', there was 'No Knock', there was 'Criticism And Self-Realization', there was 'Pernicious'. These are heavy songs. And it's almost like because you've done something that's outside of the lines, 'cause you colored outside the lines, we're not gonna even pay attention to all the stuff you colored inside the lines. This record, there's five songs on the record that are exactly what you would expect from ALL THAT REMAINS. There's some songs where we kind of were, like, 'All right, let's push this and maybe change what ALL THAT REMAINS can do, or what ALL THAT REMAINS is allowed to do.' But it ain't like we're not heavy anymore. And if you're just, like, 'Oh, they're not heavy anymore,' then you're just not listening." 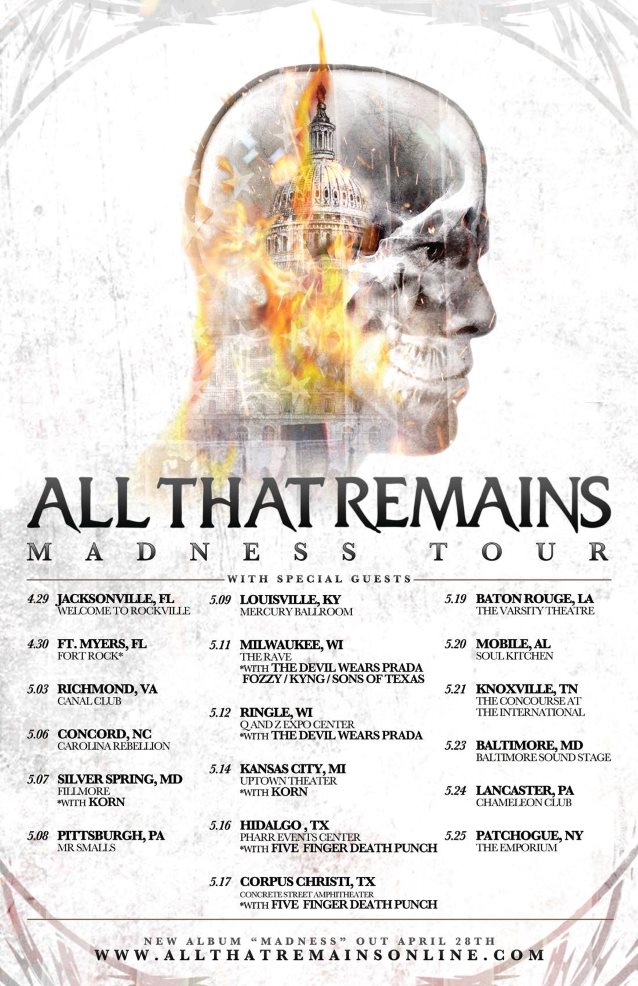