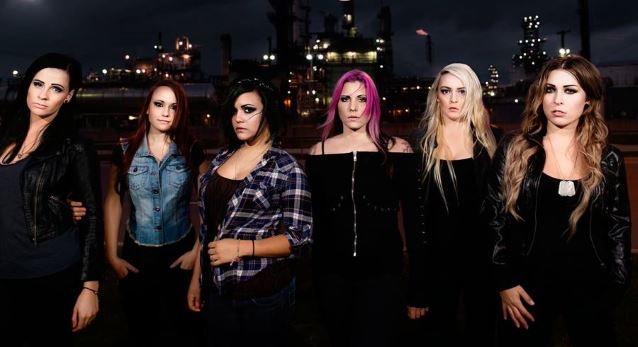 The lyric video for the song "At War" from the all-female metal act CONQUER DIVIDE can be seen below. The track is taken from the band's debut album, which will be released in 2015 via Artery Recordings.

"It wasn't an easy thing finding girls who not only were passionate about this type of music, but could play it well." So after years of looking in the States, they were forced to look all over the world, auditioning over 200 girls. They are subsequently based in two countries, the United States and England, but this hasn't slowed them down any. Vocalist Suzie admits: "We were especially lucky to find our guitarist Izzy, who shares the same vision we do. We found out quickly how much of a rarity dedicated and talented female guitar players are." The band concluded that they couldn't let distance be a factor when putting the lineup together.

"When I was contacted by the girls I instantly knew it was perfect for me, not everyone gets the chance to work with such like-minded musicians," Izzy adds.

"Joey has really helped bring our songs to life," says vocalist Kiarely. "He has pushed us to the limit and made us think outside the box. He is an amazing producer and we are lucky to have the opportunity to work with him, he definitely brought out the best in all of us."

"We wanted this album to be a game changer," Suzie explains. "We all have different musical backgrounds, and that brings our music together in an interesting way," says bassist Sarah.