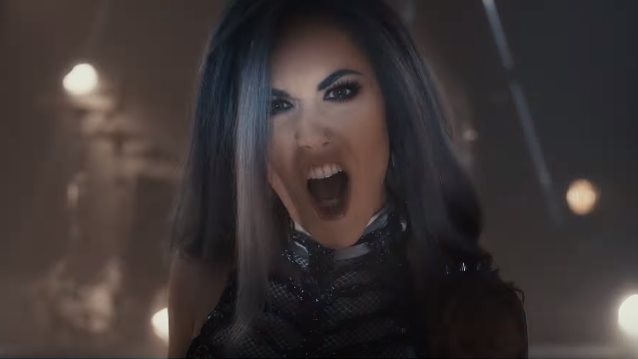 Metal Wani's Fernando Bonenfant recently conducted an interview with ARCH ENEMY frontwoman Alissa White-Gluz. You can listen to the full interview below. A few excerpts follow (transcribed by BLABBERMOUTH.NET).

On the current state of ARCH ENEMY:

On their biggest challenge while writing "Will To Power":

Alissa: "I think one of the things that makes ARCH ENEMY so unique is that we're five musicians who are all super self-critical, but also super-driven. So we always outdo ourselves. We never settle for 'This is good enough.' It always has to be amazing because that's the kind of music we'd want to listen to and that's the kind of music we want to give to other people. Because we have such a solid team of all five of us doing that, I think it makes it so that we're able to work really well with one another and we're able to continually release music that's timeless in a way. We don't follow trends; I don't think we even set trends. We just do our own thing. We just do what we love. That's why ARCH ENEMY sounds like that. I think that maybe for this album the biggest challenge was to not focus too much on trying to outdo 'War Eternal' or anything like that. Even still for me, I think 'War Eternal' — if I'm allowed to say it — for me, it's a masterpiece. Even if someone else released that album, I would be, like, 'Yeah! That's a killer album.' Not even just because it's my album. I just really love those songs. We didn't want to go in and be, like, 'Okay, we have to make something that's better than 'War Eternal'. It was more, like, 'Are we ready? Do we have songs in our heads? Do we have ideas in our hearts? Do we have this music in our blood?' When the answer was yes to all of that, we started writing and recording. Yeah, it was an interesting process. I think it's an interesting album."

On the band's mindset during the creation of "Will To Power":

Alissa: "Michael Amott is the brain behind the whole band. It all starts and ends with Michael. A lot of those riffs that you would sing along to live, they're all Michael's doing. It's Michael who writes those riffs and who delivers them with his signature style. You can always tell when it's Michael playing something. Even if he's playing somebody else's song, you can hear it's Michael playing it. I think it's just what we're feeling. We write directly from the heart. We didn't say we wanted it to sound like this or sound like that; it's however it feels right. Michael's musicianship speaks for itself. I totally trust anything… If he's, like, 'I have this great idea.' I just know it's going to be good. Before I even hear it, I know it will be good. The guitars in ARCH ENEMY are obviously a huge, huge, huge part of the band. That's what a lot of people love listening to in ARCH ENEMY, me included. It's cool that we're able to have that. Maybe not all bands have that where you can play a show and the audience will be singing with the guitar. [Laughs] That's pretty cool and I love when the audience does that. They just sing along with what the guitar is playing. It makes for a very melodic show, actually."

On ARCH ENEMY not trying to write another "War Eternal":

Alissa: "Yeah, I think we took some risks with the album, I guess. We just felt like it's the tenth studio album for ARCH ENEMY, that's not including any 'other than' studio releases. ARCH ENEMY has released a ton of stuff over the decades, but just in terms of actual albums, this is tenth one. I feel like we're all, like, 'We've earned the right to go outside of the box a little bit here.' That's why some of the songs like 'Reason To Believe' or 'Dreams Of Retribution' came about. We're just not afraid. We believe in the music so much that we're going into it totally fearless. I love it. I love every single song on this album. I think another thing that makes this album really unique and interesting is that there are some different-sounding things on there. Some things that maybe you wouldn't think were ARCH ENEMY at first, but the more you listen to it, the more you can hear it's definitely ARCH ENEMY. I feel with every listen you hear more little things and you understand the lyrics a little bit more and it gets deeper and deeper."

On guitarist Jeff Loomis's (ex-NEVERMORE) contributions to "Will To Power":

Alissa: "Jeff is such a great guitar player and he's such a great dude. Live, Jeff obviously contributes by playing up until now, anyway, he was playing the solos [former guitarist] Chris Amott played on the albums or that [former guitarist] Nick Cordle had played on the albums. He's playing the sort of, complementary guitar to Michael's guitar playing. On this album, his solos are just, like, so Jeff Loomis and so good. I feel like they just balance Michael's guitar playing style super-well. Jeff's a huge part of the album. I think people will hear that, too. They will be able to hear his influence on the album. When it comes down to it, Michael is the primary songwriter. That's still true now, but it sounds different and you can definitely hear where Jeff is on the album."

"Will To Power" is due out September 8 via Century Media Records. Co-produced by Amott and drummer Daniel Erlandsson, the disc was mixed and mastered by longtime collaborator and friend Jens Bogren (OPETH, AT THE GATES, DIMMU BORGIR). The album's captivating cover artwork was designed by Alex Reisfar.