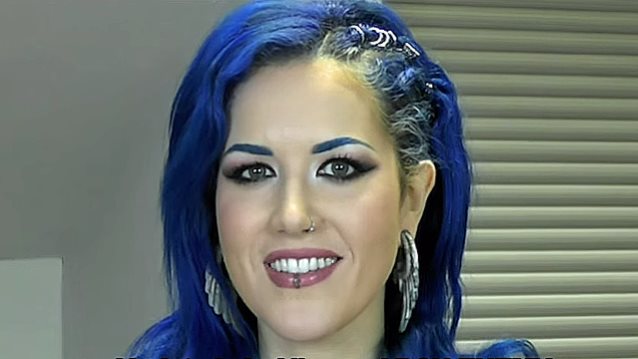 Spark TV, which is part of the Czech monthly magazine Spark, conducted an interview with ARCH ENEMY singer Alissa White-Gluz and guitarist Michael Amott before the band's December 7 concert in Prague, Czech Republic. You can now watch the chat below. A couple of excerpts follow (transcribed by BLABBERMOUTH.NET).

On ARCH ENEMY's plans for the coming months:

Michael: "Probably some sort of time off. And we need that. We need that, and the fans need that [laughs], maybe, at some point. This tour will be something like three hundred shows, the 'War Eternal' tour, and that's a lot, all over the world. And for that, we're very thankful for that opportunity, to be able to do such long and extensive tours."

On still touring in support of War Eternal" — which marked Alissa's first-ever recording with the band — a year and a half after the album's release:

Alissa: "For us, every day when we do go on stage and we're playing a show, it means even more now that the people in the audience are there and they're supporting the bands and they're watching the shows. And every time we complete a show, it means a lot to us that we've had that experience together with those people, because, as we know, not everyone gets to successfully go through [a singer change] like that and have a good experience with it. So we're just thankful that we're doing what we are doing — even more so now, I think."

On whether ARCH ENEMY will ever incorporate "clean" vocals on future albums:

Michael: "I don't know. I mean, Alissa can do a lot of things with her voice; she's really multi-talented. But then again, and maybe it's not the same, but a lot of us can play different styles and perform different styles, but we don't use it in ARCH ENEMY. ARCH ENEMY has its style; we have our sound, just about. But I think, also, we're not afraid of… There are some clean vocals, or whatever you wanna call 'em, on the 'War Eternal' album, but they're kind of hidden… or not hidden… but they're kind of used in a very way that they're not so 'in your face.' It's not like the growling, screaming verse and then you switch to the clean in the chorus. To me, that's a very boring concept, 'cause it's been done a million times. But I think using bits and pieces here and there, using all of her talents, is also very interesting."

On the musical chemistry within ARCH ENEMY:

Alissa: "I think one thing that's really cool about ARCH ENEMY right now is that I think we all kind of inspire one another, which is really interesting. Because, you know, sometimes I'll walk into the backstage, and it'll be Jeff [Loomis, guitar] and Daniel [Erlandsson, drums] with guitars jamming something, or then on stage Sharlee [D'Angelo, bass] will just start playing something on bass and I'll sing with it. Or just whatever. We all can bounce off each other musically, so there's definitely a good sort of musical zone that we all kind of float around in. So I think it'll be really interesting for the next album, because the newest addition for the next album, of course, is Jeff."