ALICE IN CHAINS will support KID ROCK at Comerica Park in Detroit, Michigan on Saturday, July 18. Also scheduled to appear is CYPRESS HILL. Tickets are on sale via Tickets.com and at the Comerica Park box office.

ALICE IN CHAINS has signed with Virgin Records, a division of EMI Music, for the release of the group's first new album in 14 years. According to a feature in the Los Angeles Times, the yet-to-be-titled disc will be out in mid-September. Production on the project was completed last month after more than a year of writing and recording. The Times writer, who got a preview of some of the material, called the album "recognizably thundering and gloomy," with an acoustic track called "Your Decision" followed by what the reporter described as "a seven-minute epic built on heavy slabs of guitar, drums and bass, something like BLACK SABBATH but far quicker."

The disc will mark the recording debut of vocalist William DuVall, who joined the group in 2006. Original singer Layne Staley died of a drug overdose in 2002 after nearly seven years in which the band was all but inactive.

Guitarist Jerry Cantrell, drummer Sean Kinney and bassist Mike Inez regrouped in 2005 for a charity show before embarking on several tours in 2006 and 2007 with DuVall on the mic.

When asked about stepping into the shoes of Staley, DuVall told the Times, "It's a big thing. I've joined a group that has a strong identity and a strong legacy. Nobody's sitting here who wants to, in any way, disrespect or sully that legacy. You want to add to it."

All of ALICE IN CHAINS' previous albums and EPs were on Columbia Records. 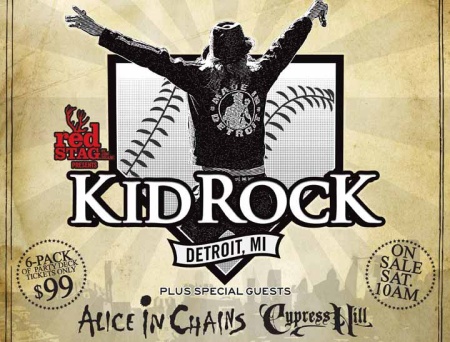