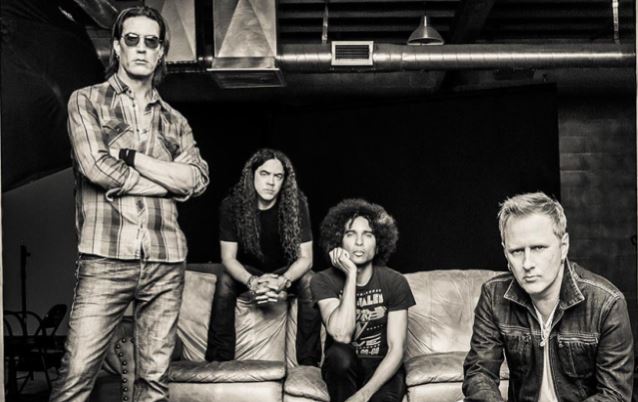 Fans can check out the Bundle to stream and download the seven-minute-plus-long "Phantom Limb" HD video, unlock notes from the director and get exclusive access to new ALICE IN CHAINS merchandise.

"Phantom Limb", co-written by ALICE IN CHAINS co-lead vocalist and guitarist William DuVall, appears on the band's most recent studio album, "The Devil Put Dinosaurs Here", which entered The Billboard 200 chart at No. 2. The CD's first two singles, "Stone" and "Hollow", both hit No. 1 on the rock radio charts, with their companion videos racking up more than 6 million combined YouTube views (both videos were also directed by Roboshobo).

In a November 2013 interview with Drowned In Sound, DuVall stated about "Phantom Limb": "'Phantom Limb' was a musical demo that was sent to me, which I immediately reacted to, and within a day or so had written all the words for it. Within the first few minutes, I had a couple of lines for it, and over the next day or so, I refined it. All that stuff happened pretty quickly. Basically within 48 hours of them sending the musical demo, I sent them back a fully formed vocal track, pretty much what you here on the record. The actual recording was reproducing what I did at home. It never had a solo, so at one point where we were at Henson, deep into recording, [guitarist/vocalist Jerry] Cantrell asked me, 'Do you wanna play the solo on that, 'Cause I don't have anything.'"

"The Devil Put Dinosaurs Here" sold 62,000 copies in the United States in its first week of release. The disc follows up 2009's "Black Gives Way To Blue", which was the group's first all-new collection of material in 14 years. That CD opened with 126,000 units back in October 2009 to debut at No. 5.