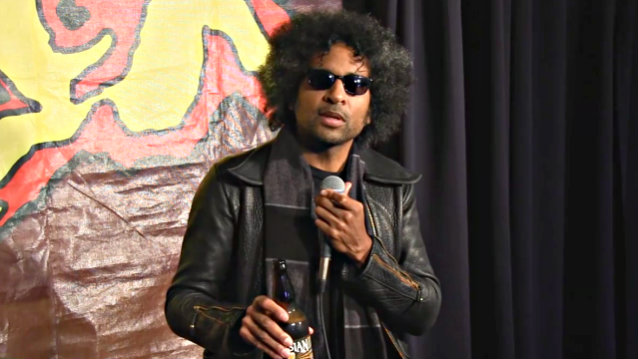 ALICE IN CHAINS singer and guitarist William DuVall says that he finally got a chance to meet Axl Rose after opening for GUNS N' ROSES several times on the latter band's reunion tour. DuVall told Seattle's KISW 99.9 radio station (see video below): "[Axl] definitely has a certain vibe and a certain magic about him. And it's cool, 'cause for the first bunch of shows we did with them on the stadium run, everyone was asking me in every town. I'd talk to the [local] radio station [and they would be like], 'Have you met Axl? Have you met Axl? We haven't.' And I was, like, 'No, I haven't, actually, I'd like to.' And then finally, last show in Chicago, he had a little gathering and had some people over. I went. He was totally chill, and it was really great."

ALICE IN CHAINS opened the first five shows on GUNS' North American summer stadium run, which began on June 23 at Ford Field in Detroit. ALICE IN CHAINS also opened for GUNS N' ROSES twice when they kicked off their reunion tour in Las Vegas in April. The two bands also played together in Kansas City on June 29 and finished their time together with a two-night stand in Chicago on July 1 and July 3. ALICE IN CHAINS then began its own headlining jaunt on July 6 in Portland, Oregon, with dates booked into the fall.

DuVall said in a different interview in June that it was "too early" for the band to talk about new music, adding that he expecting those discussions to begin in the fall.

ALICE IN CHAINS' last studio effort, "The Devil Put Dinosaurs Here", came out in 2013 and featured the rock hits "Hollow", "Stone" and "Voices".

William DuVall from Alice in Chains with The Men's Room. See you tonight at CenturyLink Field