All Secrets Known (SRP: $75/750 ml), a nod to the name of the opening track of ALICE IN CHAINS' 2009 gold-certified release "Black Gives Way To Blue", is Few bourbon finished for six months in tequila barrels and bottled at the most rock and roll of proofs, 101 (50.5% ABV). Bold, sweet, and spicy bourbon top notes that have become the hallmark of Few and led to multiple category awards, are accentuated by grassy agave undertones.

Said Hletko: "There are no two spirits that have a closer association with rock and roll than whiskey and tequila. Bringing together elements of both, but in an unconventional, innovative way, is an illustration of what we try to do every time we distill a new product.

"ALICE IN CHAINS is part of one of very few movements that can be legitimately credited with shapeshifting an entire culture, beginning with their first album, 'Facelift'," continues Hletko. "For us distilling, like making music, is about having the courage to ask, 'What if we…' and being excited to find the answers — unlocking those secrets.

"Nobody sounds like ALICE IN CHAINS. We were inspired by their courage to create a sound that flouted convention and thought, 'There are lots of tequilas finished in bourbon barrels, but it's rare to find a widely available bourbon finished in tequila barrels. Let's do that instead.'"

Added Matt Young, EVP of Warner Music Artist Services: "Our team always seeks out the best in the business when it comes to our artist product collaborations. Few Spirits was a no-brainer when the idea first came up to create an ALICE IN CHAINS bourbon whiskey."

Helton of Status Serigraph, who has worked with musical giants like PHISH, THE AVETT BROTHERS, MY MORNING JACKET, WEEN and THE BLACK KEYS, created the custom label.

"I've been a fan of ALICE IN CHAINS forever, with 'Jar Of Flies' being one of the first CDs I ever owned," says Helton. "'I Stay Away' and 'No Excuses' were on repeat in my room. For this design, I found inspiration in the name All Secrets Known. The eye in the mouth is a play on seeing all that's been spoken. The color scheme is a nod to 'Black Gives Way To Blue', the album on which the song 'All Secret Known' appears."

Helton designed the label in Adobe Illustrator and Photoshop, also using a mix of hand-rendered illustrations with imagery from the 1800s to create a distinct look.

All Secrets Known is yet another foray for Few Spirits into partnerships with internationally renowned music acts. In 2006, Hletko partnered with THE FLAMING LIPS to create Brainville rye whiskey.

"Brainville led to access," Hletko said. "Doors started opening and I've always felt like when you get a chance to work with cool people you admire, you've got to at least check it out. As a longtime fan of ALICE IN CHAINS and someone who has at various points made his living as a guitar player, the opportunity to work with someone like Jerry Cantrell, whose sound is unlike any other, was one we were determined to see through come hell or high water.

The limited-release All Secrets Known will be available in California, Colorado, Illinois, New York and Washington and for purchase online through ReserveBar.com. 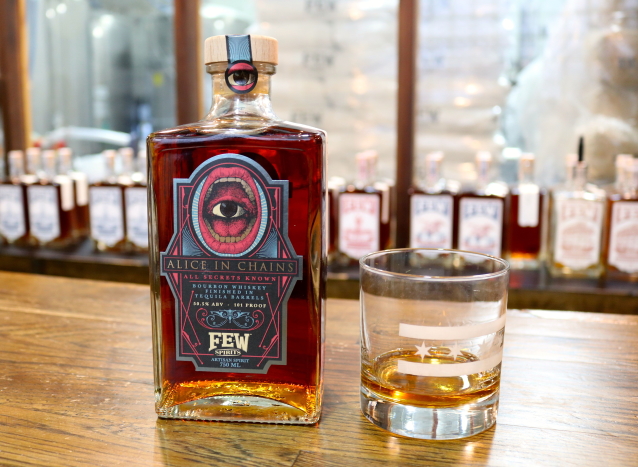