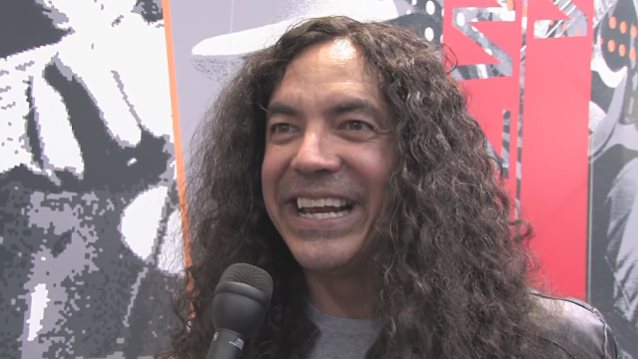 Robert DiGiacomo of Atlantic City Insiders recently conducted an interview with ALICE IN CHAINS bassist Mike Inez. You can now listen to the chat in the YouTube clip below.

On how they approach making music nowadays:

Inez: "We approach it as a new band. We try to keep it fresh. If we start thinking too much and reflecting on the past too much ... We try to stay in the moment these days. At the end of the day, we're just four guys making racket in a room. We're not curing cancer with our songs. I wish we were, but we're not. It's just getting together with our friends and making music in a room, whether it's a small rehearsal room or a big stadium. We can't forget that simple — we're just four guys making some racket, and it makes everything goa lot easier in our brains."

On what keeps ALICE IN CHAINS together after all these years:

Inez: "For us, it's definitely a family with ALICE IN CHAINS. All the bands I've jammed with have had that thing about them, whether it's Ozzy Osbourne or playing with Ann and Nancy Wilson. The key to longevity is we're friends first. Our families know each other. It's a shared mission; we don't go into this lightly. It really means the world to us still. I've been with Jerry [Cantrell, guitar] and Sean [Kinney] for 22 years I think now at this point. We're just a real family kind of organization. Getting Will [singer William DuVall] was a blessing. Unfortunately, [late ALICE IN CHAINS singer] Layne's [Staley] story and everything... We took some time off there. So it's nice to be a functioning rock band in this day age and age. It used to be we would make money off records. Now it's flipped around where it's the touring that's more central. So it's even more important now that we can travel around the world as a family and still get along with each other. That's key to being a rock band nowadays."