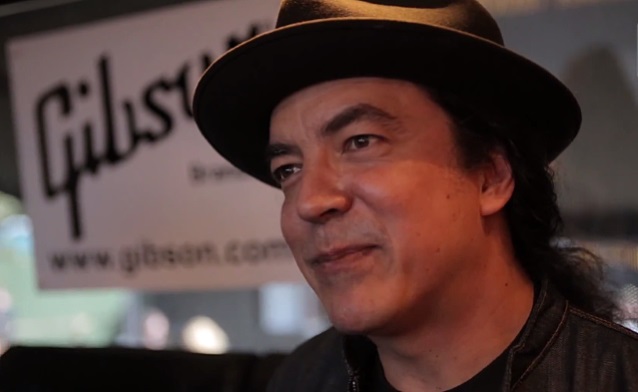 Metal Hammer magazine conducted an interview with ALICE IN CHAINS bassist Mike Inez and vocalist William DuVall at the U.K. edition of the Sonisphere festival, which was held July 4-6 at Knebworth Park in Hertfordshire. You can now watch the chat below.

Asked what is next for ALICE IN CHAINS, DuVall said: "We have a Canadian tour after we finish here in Europe. We finish up in Helsinki, Finland on July 13, so it's about a week from today, and then take a little break, then we go through Canada, and then I think we're gonna be done for the year after that. We've been going for over a year and a half, something like that, on this record, so it's time to take stock." Inez added: "[It's time to] turn into mere mortals for awhile. We always say this… If the record companies and management want you to write on the road. Like, OK, when are you supposed to write the fucking album? Between the catering and soundcheck or between the interviews and catering. I mean, we're always throwing riffs around and jamming, but the thing is we'd only write songs about tour buses and catering, so we've gotta go home, experience life and reconnect with our families. I have a wonderful wife. I walk in the door and she hands me a dogshit shovel and says, 'The dog yard is over there, rock star. Get to work.' It's funny. And, 'Here's some light bulbs and get the ladder out. You've got work to do.' She slaps me down pretty good. So [we] just need to get home."

DuVall told the U.K.'s TeamRock Radio that he is producing and directing two separate documentaries. DuVall explained that the first one, called "All Alone Together: Neon Christ And Atlanta Hardcore", "is on the Atlanta hardcore scene, of which I was a part back when it first started. So I was sort of first generation of that whole thing. The film sort of compares and contrasts the scene back then in its earliest days… with the struggles of kids who identify as punk and hardcore now."

Duvall, who broke out on the Atlanta scene in the '80s with his band NEON CHRIST, added that the film focuses on "the really underground, the basement-show kind of punks, the people who keep it grass roots even today. What are their struggles now, with the Internet and with punk having been assimilated into the mass culture and all of that."

The second film is a look at the of jazz musician Milford Graves, whom DuVall described as "one of the greatest musicians ever." He added, "What really makes him interesting even beyond that is his scientific work. The guy is doing this amazing cutting-edge cardiac research. It's as exciting and potentially game-changing as any research that you can ever hear about going on in that field."