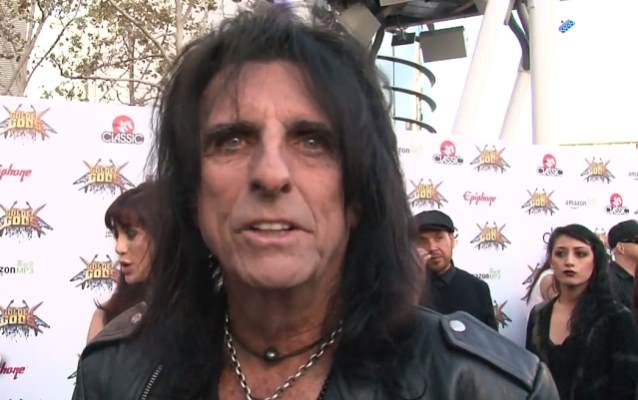 Michael Christopher of Vanyaland recently conducted an interview with legendary rocker Alice Cooper. A couple of excerpts from the chat follow below.

Vanyaland: Let's talk about the film. There have been so many run-of-the-mill documentaries over the years on musicians. What convinced you that "Super Duper Alice Cooper" would be different?

Alice Cooper: [Banger Films] came to us and we saw that they did with "Flight 666" for IRON MAIDEN and they said, "We don't want to do a talking-heads documentary where Elton John talks and then this guy talks; we want to make it linear, we want to make it the story of Alice but graphically, the whole way through. If you're going to do a documentary on Alice Cooper, it's got to be as theatrical as the character." I totally agreed with that and I loved the idea of them cooking up the Jekyll-and-Hyde connection with Alice Cooper and myself, and the fact that I talk about Alice Cooper in the third person — he's a character I play. And it was absolutely the right story; I never knew where Alice ended and the other Alice began; and that was a big gist of the documentary, that gray area. Then the alcohol involved, where does Alice start and where do I end? And it was like that from the very start. It was a really good story, and the drama behind it, the fact that here was a band that wasn't supposed to make it. Everybody hated us except for Frank Zappa and THE DOORS and bands like that. Making it to the top, almost self-destructing and then coming back; so it had a bit of a "Rocky" story to it.

Vanyaland: What sticks out most to me is how raw it is, especially with the uncomfortable parts, but you're on record saying they were some of your favorite topics to talk about.

Alice Cooper: I found the uncomfortable parts the most interesting. When they interviewed Dennis [Dunaway] and Neal [Smith], the original guys from the original band — we couldn't find Mike [Bruce], he's hard to find — the easiest thing to have done was to edit out what they say, so we look good. I said I'd rather hear their opinion of why the band broke up.

Alice Cooper: To this day we remain the best of friends. We're sitting together at Tribeca [Film Festival] watching it and all of us were squirming in our seats because everybody had a different version of why we broke up. Then there's the cocaine part, because I always denied any drug use because I thought it was so uncool to for Alice to be into drugs; it was so stereotypical that I wanted to avoid it. But when that part comes up, you have to be honest with it. That was uncomfortable for me, but at the same time it was powerful. The Tom Snyder footage of the skeletal Alice Cooper was really powerful, it was really scary.

Vanyaland: Your next recording project is a covers album [which also includes several new songs written specifically for the project]. Over the years, quite a few artists have covered your songs; CREED, MEGADETH — even Etta James. Are there any that stand out to you, either because of how different the interpretation, or because of how bad it is?

Alice Cooper: Music, to me, is so much just a piece of clay that, "Here's the verse, here's the chorus, here's the lyrics — let's see what you guys do with that." Joan Jett did a great cover of "Be My Lover". Dio did a cover of "Welcome To My Nightmare" and did an amazing version of it. Roger Daltrey did "No More Mr. Nice Guy". Every time somebody does one of your songs, I feel totally complimented that out of all the songs recorded, they would pick those songs — one of my songs — to do. I'm always really interested to hear what their take is on it. I can tell you one of the greatest thrills of my life is I went back to see [Paul] McCartney and his band. I went backstage and they were kind of warming up and I walked into the room and they all went into "Under My Wheels". There's McCartney playing bass on "Under My Wheels" and I went, "Wow." That, to me, is such a compliment the fact that he even knows that song.

Vanyaland: So you doing something similar is your way of complimenting artists and the songs you love.

Alice Cooper: I have never done a covers album. We all started as a covers band — even THE BEATLES. Instead of picking just a bunch of songs, what about doing all my dead drunk friends? All the guys I drank with that died; Jim Morrison and I used to drink, Jimi Hendrix and I used to drink, THE SMALL FACES, T.REX, Harry Nilsson — all those guys were buddies of mine. So I said, let's do an album about the Hollywood Vampires, our drinking club. There are just so many songs that you could go to. [Producer] Bob Ezrin loved the idea and it's pretty much done now, but I don't think it will see the light of day until next year because we've got the MÖTLEY CRÜE tour for 72 shows and we don't have the time to wrap a show around the covers album until next year.

Read the entire interview at Vanyaland.