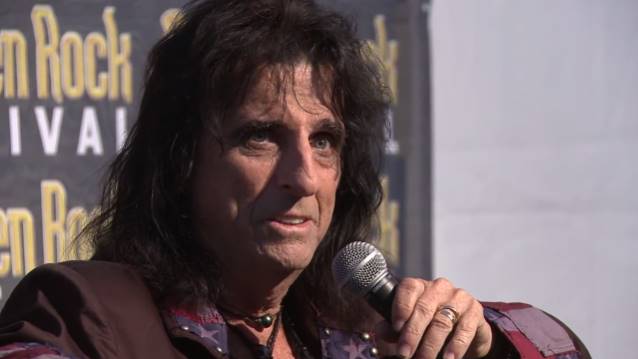 Legendary rocker Alice Cooper has told RollingStone.com that he is excited by the news that Axl Rose will be fronting AC/DC on the next leg of the latter band's upcoming world tour. "I just think that's such a unique combination," Alice said. "Whoever has tickets to that show has got the golden ticket, because who doesn't want to see that?"

Cooper said that he heard about the pairing a while ago, but didn't believe it at first. "At first I thought it was an April Fool's thing," he said. "I went, 'Oh, come on.' Then I started thinking about it and said, 'You know, his voice is absolutely perfect for that band. That might just work.'"

AC/DC postponed the last ten dates of its recent North American tour after doctors told singer Brian Johnson he faced "total hearing loss." Those dates will be rescheduled, with Rose on vocals. In the meantime, the Axl-fronted AC/DC will embark on a European stadium tour, starting on May 7 in Lisbon, Portugal and running through June 12 in Aarhus, Denmark. Following the European run, Rose will head out on tour with his GUNS N' ROSES bandmates for the "Not In This Lifetime" summer stadium tour.

Jesse Fink, the AC/DC biographer who wrote "The Youngs: The Brothers Who Built AC/DC", called the Rose recruitment "the worst decision AC/DC has ever made. Fans are pretty disgusted," Fink said.

"AC/DC is an institution, a way of life for a lot of people," he continued. "And a huge proportion of the AC/DC fan base loves Brian. They feel the band owed him a lot more than to go out the way he has and they want the truth, not an emotionless press release that makes it sound like he was made redundant from a motor plant.

"Would Malcolm [Young, now-retired AC/DC guitarist] have agreed to this? It leaves the question of who is making the decisions for AC/DC. Angus [Young, AC/DC guitarist]? George [Young, the older brother of Angus and Malcolm]? [Accountant] Alvin Handwerker? Sony?

"There seems to be a power vacuum since Mal retired from the band and whoever is making the decisions is, frankly, making pretty poor ones. This is the worst decision AC/DC has ever made."