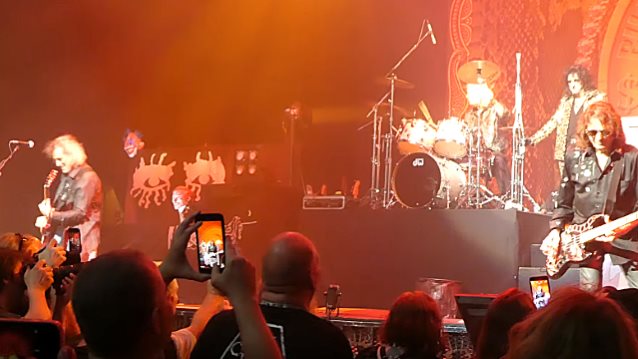 Alice Cooper was rejoined by three members his original band — bassist Dennis Dunaway, drummer Neal Smith and guitarist Michael Bruce — for a special performance earlier tonight (Sunday, May 14) in Nashville. The legendary rocker's concert at the Tennessee Performing Arts Center's Andrew Jackson Hall included a five-song set by the quartet who were inducted into the Rock And Roll Hall Of Fame in 2011. The encore, "School's Out", saw Cooper, Dunaway, Smith and Bruce joined by the rest of Alice's current band — guitarists Ryan Roxie and Tommy Henriksen, plus bassist Chuck Garric and drummer Glen Sobel.

Dunaway, Smith and Bruce appear on Cooper's forthcoming album, "Paranormal", produced again by longtime collaborator Bob Ezrin and due on July 28 via earMUSIC.

Cooper last year released a special seven-inch single containing two songs he sang in 2015 with the surviving members of the original ALICE COOPER band. The set, which took place in October 2015 at Dallas music store Good Records, brought Cooper together onstage with Dunaway, Bruce and Smith for the first time since 2011, when they staged a pair of performances coinciding with their induction into the Rock And Roll Hall Of Fame as well as their appearance on Cooper's "Welcome 2 My Nightmare" LP. Guitarist Ryan Roxie, a member of Cooper's current band, stepped in for Glenn Buxton, who died in 1997.