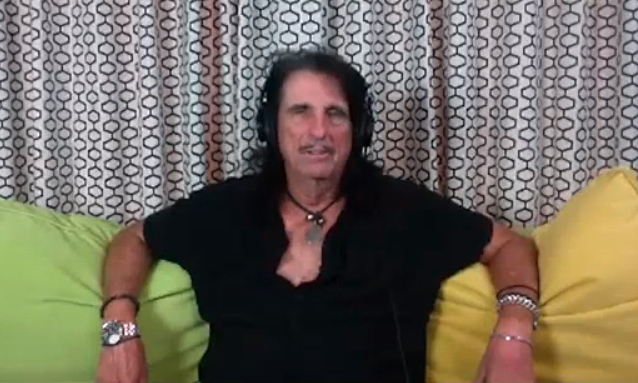 In a recent interview with Italy's Radio Freccia, legendary rocker Alice Cooper spoke about how he goes about putting together a live show in 2020. He said (see video below): "I think that anybody can buy a show — you can go out and buy the lights, you can buy the explosives, you can buy all this. But the way Alice Cooper does it is the songs, the lyrics tell me what's going to happen on stage. So I write the show much more like a story.

"This new show, it looks like an old dark castle," he continued. "All of a sudden, Alice comes through this thing. Every single lyric is what Alice literally does on stage. So I let the lyrics be the script of the show. And it doesn't have to be a huge show. I like the idea of the show being almost more intense. Like, if you take my show into a theater, it's much more of a theater piece. Except the fact that the band is the best band I've ever worked with. Nita Strauss, she just got voted guitarist of the decade. Glen Sobel, my drummer, got voted best drummer in rock and roll. Ryan Roxie and Chuck Garric and all these guys, they are so good. And on top of it, they're all best friends, so there's never any ego problems, there's never any arguments… There's no stress. The stress is not there. It's just fun."

Last month, Cooper said that his new album, "Detroit Stories", was "99 percent done and just being polished." The LP, which is once again being produced by Cooper's longtime collaborator Bob Ezrin, features contributions by such Michigan talent as the MC5's Wayne Kramer, GRAND FUNK RAILROAD's Mark Farner and Johnny "Bee" Badanjek of MITCH RYDER & THE DETROIT WHEELS. They also used the Detroit Horns and Detroit background singers.

This past May, Alice released a new single, "Don't Give Up". Produced by Cooper's longtime collaborator Bob Ezrin using remote technology, the song is a spontaneous reaction to the challenges facing us all right now.

Last September, Cooper released a six-track EP called "Breadcrumbs", described as a tribute to the garage-rock heroes of his hometown of Detroit.