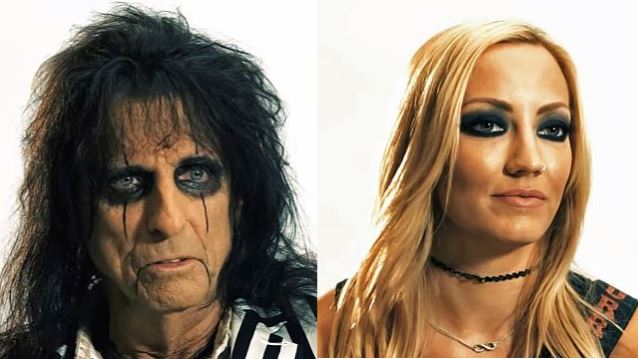 Musician's Friend conducted an interview with legendary rocker Alice Cooper and his guitarist Nita Strauss at the Magnolia Hotel in Houston, Texas in August 2016. You can now watch the chat below.

Speaking about how he got Nita to join his band, Alice said: "We're doing a MÖTLEY CRÜE tour. I've got two rock and roll guitar players with Ryan Roxie and Tommy Henriksen. I need a shredder. I really need a shredder. And then somebody came in [and suggested Nita]. I heard her play, and I went, 'That's what we want right there. That's exactly what we want.'"

Nita said about the experience of playing with Cooper: "So many of my heroes were in Alice Cooper's band. I didn't even know some of these guys were in the Alice Cooper band until joined the band and I looked on Wikipedia and I saw all these names. And then I saw, at the bottom of the list, there was my name at the bottom of the list, and I was, like, 'That's cool.'"

In a recent interview with Jammcard, Nita spoke about how she got the gig with Cooper. She said: "I did my first round of video auditions, and I just thought, 'I'm gonna smash it! I'll knock it out of the park. I'm gonna pull out every stop, playing over the neck, doing all kinds of stuff, playing upside down.' You know, [I thought I would] play every trick I know, every cool, crazy, demented lick I know. And I sent it over. It was two songs, which are about four or five minutes each. So it should have taken them ten minutes to watch the whole package and think about it. I think [Cooper producer Bob] Ezrin called me within three minutes. He was, like, 'This is not what we want at all.' I think his exact words were, 'Can you do anything else?'"