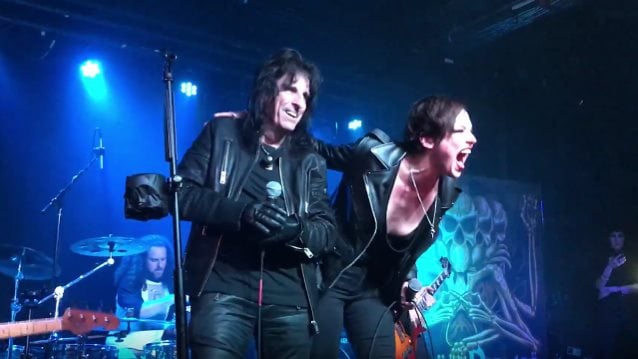 A couple of years ago, Lzzy recalled meeting Alice Cooper in a record store and providing the iconic singer with some decidedly un-rock 'n' roll drugs. "They were antacids," she told Playboy.com in a 2013 interview. "I ran into him in L.A. He was shopping for CDs with his daughter Calico, and I saw him there and I ended up talking to him and realized I had actually met Calico years ago when we were in Philly — she was dating some guy we were playing with. So anyway, Alice is really quiet and while we were talking he was looking at my keychain. On my keychain, I have this little pill carrier that I carry my earplugs in, and he taps on it and says, 'Do you have any Pepcid AC in there because I got major heartburn,' and I just happened to have Pepcid AC, not in the pill box but on me, because my dad at the time was working at the Pepcid AC factory. So that's my story about giving Alice Cooper drugs."

She added: "He's a great dude. I ended up being a prop in his show; he had me handing out these huge balloons during 'School's Out' where I'd toss them to the crowd and he'd stab them and confetti would go everywhere, and I stayed up to sing with him. He's a really nice guy, really laid back, and his entire crew is like family since they've been working for him for like 20 years. So when you're with him, it's a good experience."

"She and I are Bonnie and Clyde, the Natural Born Killers," Garric told the Nashville Scene. "Entertainment is the key to what we do. The music is important, but at the same time, when you come to a show, I need people paying attention."