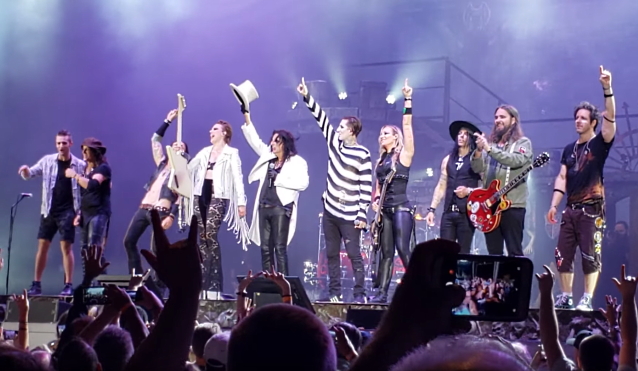 MOTIONLESS IN WHITE's Chris "Motionless" Cerulli and HALESTORM's Lzzy Hale joined Alice Cooper on stage this past Thursday night (August 15) at PNC Bank Arts Center in Holmdel, New Jersey to perform the Cooper classic "School's Out". Fan-filmed video footage of their appearance can be seen below.

Slotted as the opening act for the ALICE COOPER/HALESTORM North American summer tour, MOTIONLESS IN WHITE has been subjected to an older, perhaps less understanding crowd than what it is normally used to. In an interview with Cameron Buchholtz of the Oklahoma City, Oklahoma radio station Rock 100.5 The KATT, Cerulli shared what it was like for him and his bandmates to step on stage and realize they were playing songs that the ALICE COOPER audience may not exactly be familiar with.

"The most awkward moment for us was the first two or three shows," he said. "We played 'Necessary Evil' and it didn't click in my brain until we were just about to get to the chorus. I'm, like, 'Oh boy, some of these older people are going to know where the 'It's my party' thing actually is from.' A lot of the younger fans don't know, or they think it's Melanie Martinez or something, but a lot of these older fans are going to know and be, like, 'What the hell am I witnessing right now?' So that was the most imploding, 'Oh god, I want to die right now singing that part watching them just be like 'What the fuck is this?' But it's still been really fun."

A couple of months ago, Hale said that she was "so excited" at the prospect of touring with Alice. She said: "We're ticking that off the bucket list. We've done a couple one-off shows with him over the years, and we've gotten to know him and his family, but this is the first time we’re on a full-fledged tour with him."

She went on to talk about what Cooper means to her on a personal level.

"Alice Cooper was the reason that I found out I was not cool when I was a kid," she said. "My parents moved to a new place when I was 11 years old. At this point in time, I loved Alice Cooper. I loved DIO and BLACK SABBATH and DEEP PURPLE, VANILLA FUDGE, that kind of thing. Moving to a new place, don't know anybody there, a couple of neighborhood girls invite me to a sleepover. They're, like, 'Bring some of your favorite CDs. We're going to listen to everybody's favorite music and do each other's makeup,' that whole thing.

"I'm 11 and I end up bringing to the sleepover Alice Cooper's 'Love It To Death' and DIO's 'Holy Driver'. This is '96 so this is TLC, BACKSTREET BOYS, that kind of thing. They're playing 'Waterfalls' and there's a bunch of other things going on. 'Oh, let's listen to Lzzy's CD.' Put in the Alice Cooper CD. We didn't make it past the first chorus. They're, like, 'Let's put another CD back on.'

"I remember going back home and Dad was, like, 'How was the sleepover?'" she continued. "I'm, like, 'It was fun, but they didn't like my music.' Dad's, like, 'That's good.' I'm, like, 'Why is that good? They don't like my music.' He's, like, 'They like all of that music because it's on the radio and people in school think you're supposed to like it. You love this CD — you love Alice Cooper — because you really love it. It's a part of you.'"