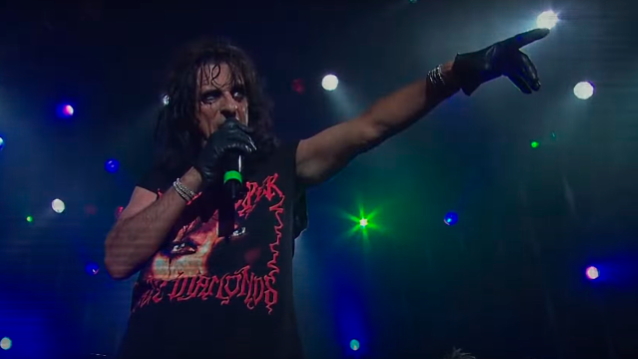 On May 29, legendary rocker Alice Cooper was a guest on We Are Hear's "Raise Your Horns With Lzzy Hale" — hosted by HALESTORM's Lzzy Hale. Speaking about how, despite all his success, he remains humble and down to earth, Alice said (see video below): "I don't think I've ever refused an autograph or a picture to anybody — only because, to me, it's a compliment, the fact that they would actually want me to sign something. I draw the line with somebody who has seven of the same albums 'cause I know they're selling 'em. But I'll ask 'em right upfront; I'll say, 'Are you supporting your family or your kids with this?' 'Yes, I am.' 'Okay. I'll sign 'em.'

"But, honestly, leave the ego onstage," he continued. "And when I get out in the public, every single day, [my wife] Sheryl and I end up at the mall, whatever city we're in. I have a baseball hat on, sunglasses. If somebody recognizes me, sure — take a picture.

"I always heard, 'Never meet your heroes, 'cause you'll be disappointed.' That's not in the least bit true. I got to meet [Frank] Sinatra, Elvis [Presley], THE BEATLES — every single one of them, the bigger they were, the nicer they were. They were always the nicest people, 'cause they didn't have to prove anything. And I said, if I ever get anywhere near that level…

"It actually takes a lot of energy to be a jerk," he added. "And how awful to have to live with yourself if you're just walking around, going, 'Eh, I won't sign anything. Bleh.' I just go, 'C'mon!' That's always for the bands on their way up. But if you take a guy like [actor and HOLLYWOOD VAMPIRES bandmate] Johnny Depp — Johnny is the nicest, sweetest, will sit and talk to anybody for two hours on a park bench. And when you get to see those kind of people, you realize that that's what you wanna be — you wanna be big and nice at the same time. [Paul] McCartney — nicest person you've ever met in your life. THE [ROLLING] STONES — nicest people you've ever met. And that's great. That's what you should strive for — is to have a great reputation."

Last month, Alice released a new single, "Don't Give Up". Produced by Cooper's longtime collaborator Bob Ezrin using remote technology, the song is a spontaneous reaction to the challenges facing us all right now.

Cooper recently completed work on his new album, "Detroit Stories". The LP, which was once again produced by Ezrin, features contributions by such Michigan talent as the MC5's Wayne Kramer, GRAND FUNK RAILROAD's Mark Farner and Johnny "Bee" Badanjek of MITCH RYDER & THE DETROIT WHEELS. They also used the Detroit Horns and Detroit background singers.

Last September, Cooper released a six-track EP called "Breadcrumbs", described as a tribute to the garage-rock heroes of his hometown of Detroit.