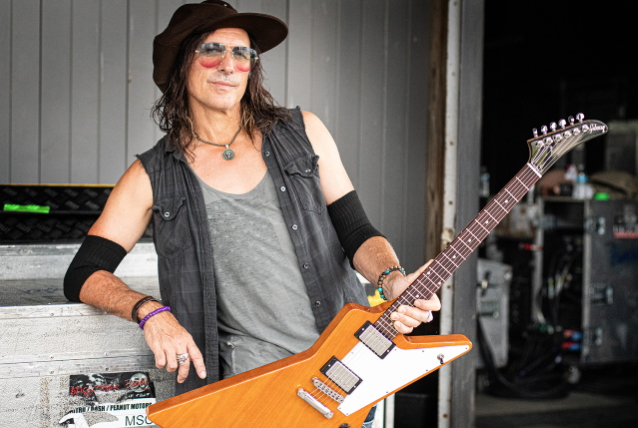 Veteran touring guitarist Ryan Roxie, best known for his longtime collaboration with the legendary Alice Cooper, has been vocal in recent years about "passing the torch of rock 'n' roll" on to the next generation. Now he's taking all of his experience and passion and putting it into what he calls the "System-12 Guitar Method".

Ryan noted: "My team and I have been working on a fresh new approach to learning guitar that differs substantially from the more 'traditional' methods that have been taught in the past. This new 'system' for learning guitar is easy to understand, filled with guitar 'life-hacks,' and focuses on the most important techniques and theories to get one playing songs and riffs faster than any other learning method out there."

Originally intended for release during the now-postponed Alice Cooper USA/Canada tour this April, Ryan took the decision to release it early in its "beta testing" form.

"We found that the fans were posting social media saying they were stuck inside doing nothing but binging Netflix shows," says Roxie, "and for me there's only so many episodes of 'Tiger King' that you can watch. We brought this project forward so that hopefully anyone who wants to learn the guitar NOW while they have the free time (and no distractions) can, while we finish the final version."

For more information, or to support Roxie's project, go to RyanRoxie.com.