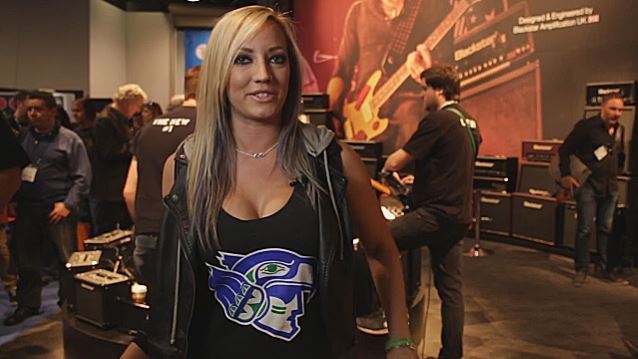 Former THE IRON MAIDENS guitarist Nita Strauss, who last year joined Alice Cooper's touring band, talked about her Blackstar Series One104EL34 amp at this year's NAMM show, which took place at the end of January in Anaheim, California. Check out the clip below.

Cooper kicked off his summer 2014 run with three shows in Michigan in June before joining MÖTLEY CRÜE's final tour as a very special guest on July 2, running through late November. The trek marked the debut of Strauss, who was ranked #1 on Guitar World's list of "10 Female Guitar Players You Should Know." She took the place of Orianthi, who toured with Alice for a few years.

Strauss, a longtime Ibanez signature series endorsee who made her name with THE IRON MAIDENS, FEMME FATALE and LA Kiss, joined the rest of Cooper's band — guitarists Ryan Roxie and Tommy Henriksen, plus bassist Chuck Garric and drummer Glen Sobel.