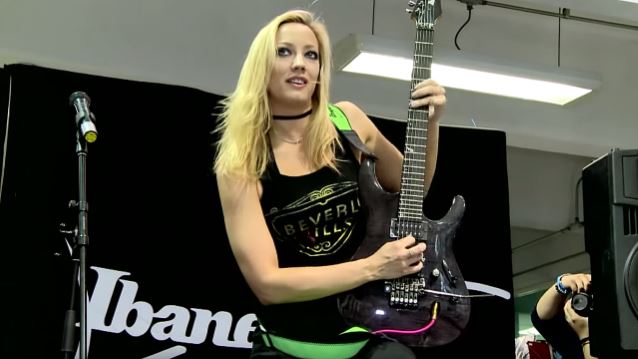 On September 9, Nita Strauss, the Los Angeles-based guitar shredder for the Alice Cooper band, was interviewed at her guitar clinic at Veerkamp in Mexico City, Mexico. You can now watch the chat below.

Speaking about what advice she would give to any young musicians, Nita said: "I think the real key to a successful career in the music business is just never give up — never give up on your dream, never give up on your passion, and do whatever it takes to get there. Take all the necessary steps, don't take any shortcuts, get everything that you need to do in order, practice hard and be cool with people, get a good reputatation. Don't be rude to people, don't make problems. And that's the most important thing, really. To be a professional musician, everything is about your image and your referral. And if you're somebody that nobody wants to work with, guess what: nobody's gonna work with you. [Laughs] So it's important. And just practice hard and never, ever give up."

Asked if her upcoming solo album will include any of her lead vocals, Strauss told The GuitCast podcast: "No. I want people to buy it, so I'm not gonna sing on it. [Laughs] I might have other people sing on it. I haven't really decided yet."

She continued: "It's so hard. I've been on the road. We've been on this world tour, on and off, with MÖTLEY CRÜE, and then doing our own shows for about a year and a half. And we don't really get a break. At least I don't get a break, 'cause I have clinics whenever the tour's on a break, so I don't really have a break until January 2. So it's just been a process of writing the album in hotel rooms and on the bus."

Strauss added: "I'm a huge, huge [fan of] Greg Howe, Shawn Lane… That's what I listen to. Even Jeff Loomis's solo stuff… I don't listen to a lot of music with vocalists, [so you can say] I'm an instrumental guitar fan. So a lot of the album is, for sure, gonna be instrumental. I may have… One idea that I have is maybe doing half and half — having guest vocalists on a few songs, and then doing some instrumentals. So I'll just see how it comes out. I have a couple of people in mind [to lay down some vocals] — just from the L.A. scene, bands that I grew up with and stuff. So I have some cool ideas, I think."

Nita previously told NI Rocks about her plans for a solo album: "It's a baby project. I'm just forming the idea in my head and trying to decide if I want it to be all instrumental or have some vocalists. I'm really excited about the concept of adding some vocals, maybe getting some female vocalists, like the girls from the BUTCHER BABIES and maybe get Alissa from ARCH ENEMY. I know I'm going to ask my friend Tina Guo, the cello player, to play on it. I just played on her upcoming album, so she owes me one; she has to play on my album. It's going to be a really interesting album. I'm really excited to see what it sounds like when all is said and done."