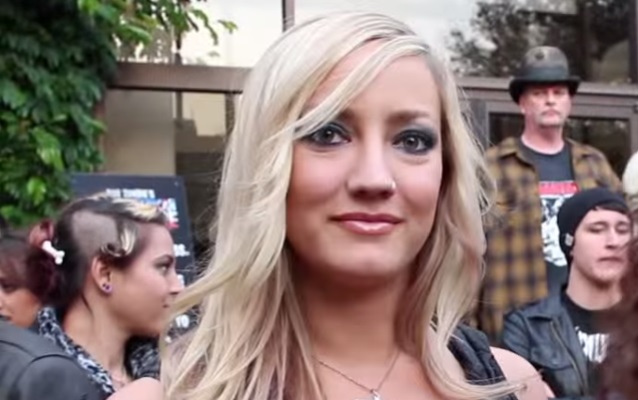 Metal Life magazine conducted an interview with former THE IRON MAIDENS guitarist Nita Strauss, who last year joined Alice Cooper's touring band, at this year's NAMM show, which took place at the end of January in Anaheim, California. You can now listen to the chat in the YouTube clip below. A couple of excerpts follow (transcribed by BLABBERMOUTH.NET).

On the importance of being able to play different styles of music:

"Versatility is key. I'm playing in ALICE COOPER now, [and] I'm doing all this other stuff. And I was a kid from L.A. and I just wanted to play thrash metal. But now, all of a sudden, I've got thrown into these situations where I'm playing with orchestras, or I'm playing funk, or I'm playing straightforward rock, like ALICE, and it really helps you grow as a musician to not just limit yourself to one genre."

On whether her growth as a musician was a personal decision or something that came about out of necessity:

"It was absolutely, totally out of necessity. I never set out to be, like, 'I'm gonna do this,' or, 'I'm gonna find a funk band to play funk gigs 'cause I wanna grow as an artist.' I [got] the call. They said, 'Can you play funk?' I said, 'Yes, sir.' Then I had to Google what funk guitar playing was. [Laughs] I hung up the phone, and I was, like, 'I should probably…' 'Cause, in my mind, at the time, when I got the call to audition for Jermaine Jackson, [they asked me], 'Can you play funk?' And I was, like, 'Yeah.' 'Cause, in my mind, I was, like, 'I can play that fast.' In my mind, I was just, like, 'That's not too fast for me. I can play that.' [Then] I realized it wasn't about speed at all; it's about the emotion of the notes. And it was really, really cool."