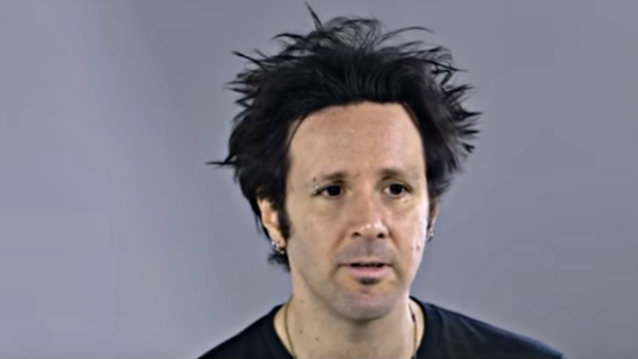 Nick D'Virgilio of Sweetwater recently conducted an interview with with drummer Glen Sobel (ALICE COOPER). You can now watch the chat below.

Asked how he came to fill in for MÖTLEY CRÜE's Tommy Lee at five shows on the Vince Neil-fronted band's "The Final Tour" last October, Glen said: "[Tommy] had a severe case of tendonitis in his wrist or his forearm [and was unable to play].

"It happened one day. I was in my hotel room. And we'd [Alice Cooper] been on tour with them on and off for a while, so, of course, that helped, to just even hear the show in the background. But I got a call from their production manager, Robert, and he's, like, 'I need to talk to you about something serious. Can you fill in for Tommy tonight on the show?' And the first thing I said was, 'Okay, who's messing with me?' Of course, I thought it was a joke. There's a few practical jokers in that camp. But he assured me it was serious. And so I went right into that mode. I said, 'Okay, have a guy pick me up and get me to the venue. Have Adam' — that's their sound guy — 'have him make me a recording of the latest show on a thumb drive. I'm gonna sit with a laptop in one of the production offices and make 'cheat sheets.''

He continued: "This is what drummers do. It's not transcribing note for note. If the kick-snare pattern is one thing for the verse, you write that out, and you write the number eight over it, meaning eight bars of that kick-snare pattern. It helps that, of course, Tommy Lee is a big influence. But even if you think you know a song really well, I still make the cheat sheets, 'cause you never know. I mean, what if Vince Neil doesn't sing? That happens; he just lets the audience sing. You can't rely on anything. I have to have the music stand there. I said, 'Get me a music stand with a light attached to it.' They have a lot of pyro on their show — a lot of bombs going off literally on the sides of the drum set.

"I used my kit, and we scaled it down between sets. But, yeah, Tommy's tech, Nick, and my tech, Michael, they did a great job, 'cause there was a 20-, 25-minute changeover. They were able to switch it up quick, and that worked out really well. I had his subs and his monitor rig behind me. I was on ears, and so was Tommy, but this was, like, massive amounts of subs. It's the biggest sound I will ever have."

Sobel also talked in more detail about the emotions that he felt while playing the MÖTLEY CRÜE hits on their last-ever tour. "It was stressful the first day, but I knew, 'Okay, I'll just get through the first show and we'll be good,'" he said. "The first show, I wasn't worried about putting on a performance; it was about focusing on the music stand. I didn't wanna trainwreck MÖTLEY CRÜE in front of ten thousand people. They have click tracks on everything, which is a big help when you are subbing. And after the first show, yeah, it got fun. I did five shows, and [the other guys] were totally cool. Tommy was cool. I felt, of course, bad for him. I've been in the same position, where I had an injury and I had to step aside and have a sub. It's happened to a lot of drummers. It's one of those things. People don't realize how much you're getting beat up back there.

"But I finished out that leg of the tour, and then MÖTLEY CRÜE had a couple of weeks off, and I guess Tommy had gotten a couple of cortisone injections and we came back and toured with them in Europe, and he was fine. But he was very, very cool. He was able to talk to me in the in-ears while I was playing, and all the guys were really cool. I miss them."