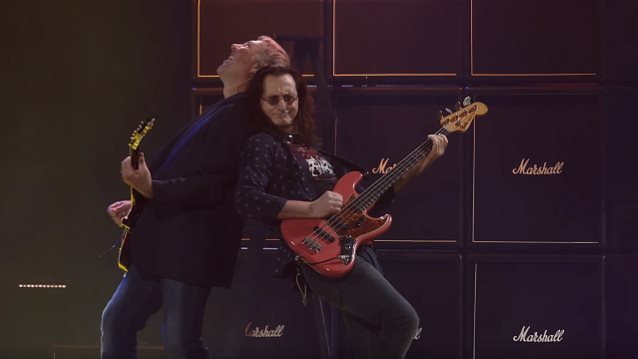 RUSH guitarist Alex Lifeson and bassist/vocalist Geddy Lee appeared on the latest episode of "Sound Opinions", the long-running Chicago Public Radio program hosted by Jim DeRogatis and Greg Kot. They talked about a variety of topics, including the future of their iconic band.

Alex said: "I think right now we don't have any plans for anything. Keep in mind that we had a year and a half off after the 'Clockwork Angels' tour; we didn't talk about anything to do with the band in a year and a half. So I think we're just in a stage now where we're just kind of taking some time, reconnecting with our families and friends and pursuing some other interests, and having some fun, really. I know Geddy and I love writing together; we've been doing it since we were young teenagers. And I'd like to think that we'll do it until we're very old men instead of just mostly old men."

Added Geddy: "I think for Neil [Peart, RUSH drummer] it's become too hard. And that's a phrase he likes to use. To play for three hours, to play the way we feel is being RUSH, the way RUSH plays is a three-hour show that's very complicated. And that has taken its physical toll on his body. During the course of any of the last few tours, he's gone through periods that he's having problems — whether it's tendonitis or whether it's some other thing. So I think for him it's enough; he can't go through all that again. So that's gonna dictate, obviously, what performing live is gonna mean for RUSH. And whether that happens or not, I can't really say at this point."

Continued Alex: "I know Neil's in a great headspace now; he's really enjoying his life and feels great. He's spending a lot of time with his daughter and his family and doing the things that he loves to do, with his health intact. So that's a very positive thing."

Peart last year admitted to being "of two minds" about another lengthy run of concert dates, pointing out that having a young child at home makes it difficult for him to be gone for weeks at a time.

RUSH recorded and filmed "R40 Live" over two sold-out shows in the band's hometown of Toronto at the Air Canada Centre on June 17 and June 19, 2015 in the middle of their "R40 Live" 35-date North American tour.