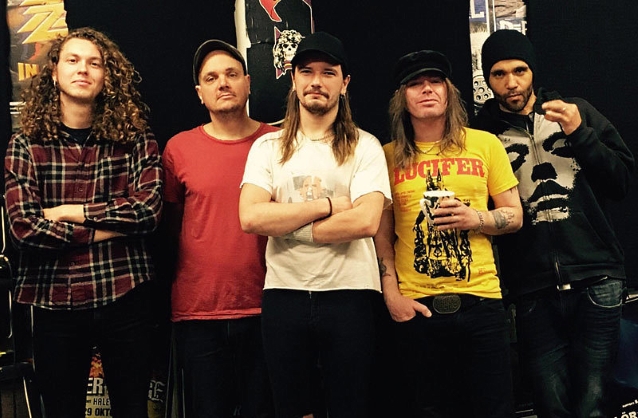 "The Metal Gods Meltdown" recently conducted an interview with guitarist Alex Hellid of veteran Swedish death metallers ENTOMBED. You can listen to the entire chat via the Soundcloud widget below. A few excerpts follow (transcribed by BLABBERMOUTH.NET).

Alex: "We are extremely pleased that we finally pulled this off because we never pulled it off when the album was originally released. The first time around when we toured on this album, was probably 'Gods Of Grind' in 1992. The first show at the London Astoria was recorded and Earache [Records] later released it as 'Monkey Puss [Live In London]'. I remember that we, at the time, were less than happy with our performance at the show. It was actually the first show on that tour and we probably played it twice the speed. These songs are difficult enough as they are, so this time, we rehearsed a little more and tried to keep the tempo a bit moderate. I think we pulled it off. We're very happy with the release. It's probably our first — we see it as our first proper live album as a band. It's great we could do it for this album."

On whether he ever could have imagined "Clandestine" having such an impact upon its 1991 release:

Alex: "Never. You're amazed you're alive 25 years later and remember your name. So, no. I remember when the first album ['Left Hand Path'] came out, we sort of were never taking anything for granted, even to do the second album. I remember thinking 'I wonder if they will let us do a second album if maybe it sells a hundred copies or something.' So, yeah, it's really fun that we can do it this way."

On what makes "Clandestine" stand out from other death metal albums:

Alex: "For us, we really tried to do something that we weren't fully skilled enough to do, but we met this band ATHEIST at a show here in Sweden in 1991 or 1990 and they really influenced us a lot to make the album a lot more technical than the first album. A lot of people at the time were saying 'Oh, what happened? Why did you change so much?' Now, 25 years later, most people don't see it as being too much different from the first album, but back then, a lot of people were not too happy that we changed the style a little bit from album to album. Just as people got used to what they thought ENTOMBED was, there was a change and I guess it was the first time people experienced that change. Yeah, it's always been a challenge to play the album live. The first reactions now when I read some of the comments on social media, is that people are hearing things for the first time, which is exactly what I was hoping for. There is a lot on the album that I know most people probably have not heard. I was really happy to see this — one guy was saying he was going to polish off his guitar and de-tune to C again so now he could play along with the album now that he heard what was actually going on. To me, that was a great review."

On whether ENTOMBED has plans to recreate "Live Clandestine" with future live shows:

Alex: "Hopefully. We are getting some really interesting offers now. We definitely hope to do that. We were actually talking about recording something last year so we could have said yes to a few of these great offers and do a few of these shows this year. As of now, we will maybe start recording something before the summer and maybe put a few, like pretty much what we were doing from the beginning — you do two or three songs and maybe put those out instead of waiting for a full album. Then maybe we'll put it together to an album in the end, but not just have to wait around until everybody has four weeks in a row that we can take. That wasn't the way we worked back in the day, and now, these days, it's very difficult to get that time. I think we'll pretty much go back to working [the way we did] as kids, and I think that will be the right way for us to work. We're really excited about that. Nicke [Andersson, drums] has been on tour with LUCIFER in the States, so he came back a week or two ago and he called me the other day and said, 'My drum kit is up. The studio is done. I'm ready to start recording these songs we have.' I'm really pleased about that. It's always a good sign when the other guys are fired up and ready. I'm looking forward to that."

ENTOMBED has been virtually inactive since it played "Clandestine" in its entirety at Malmö Live in Malmö, Sweden on November 12, 2016. Sitting in first with conductor Josef Rhedin and the hundred-plus-member Malmö Symphony Orchestra for Thomas Von Wachenfeldt's arrangement of "Clandestine", the band performed "Clandestine" from front to back for the very first time.