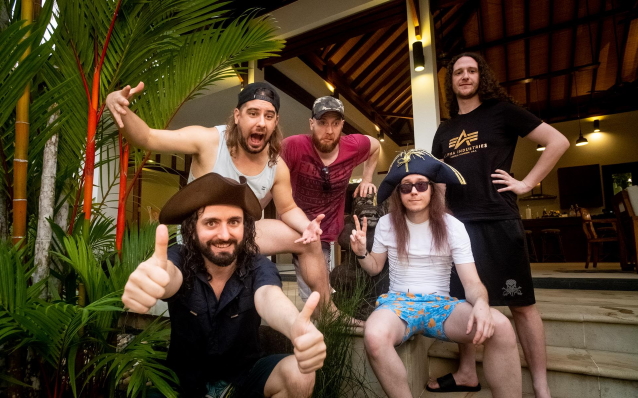 Scottish pirate metallers ALESTORM have entered the studio to record their new album, "Curse Of The Crystal Coconut", to be released this summer via Napalm Records. The band's sixth studio LP promises new anthems bursting with the chaotic energy ALESTORM fans have come to love.

ALESTORM's latest album, "No Grave But The Sea", was a worldwide success, reaching No. 1 on the U.S. Heatseekers album chart, No. 14 on the German album chart and other top 20 placements in Austria, New Zealand, Switzerland and Belgium.

Commented ALESTORM: "Oh wow, humans of planet Earth! We're super excited to announce that today we have entered Krabi Road Studios in Thailand to begin the recording of the sixth ALESTORM album, which will be called 'Curse Of The Crystal Coconut'! We may or may not have stolen that title from Donkey Kong. Anyway, we'll be here for the next three weeks recording 13-ish songs, some of which will be so absolutely terrible that they'll never see the light of day. The ones that somehow turn out alright will be released on Napalm Records sometime in the early summer! Lots of updates coming soon, stay tuned and we'll tell you all about it."

Last fall, ALESTORM vocalist-keytarist Christopher Bowes told Exclaim! that the band's upcoming disc will include a cover of a 17th-century traditional Scottish pirate song. He said: "Some people take the whole pirate thing a lot more seriously than us. The new album is all about pirates, still. I mean, it's increasingly bizarre pirate things, but it always comes back to involve a ship and an eye patch and a bottle of rum: classic pirate goofiness."