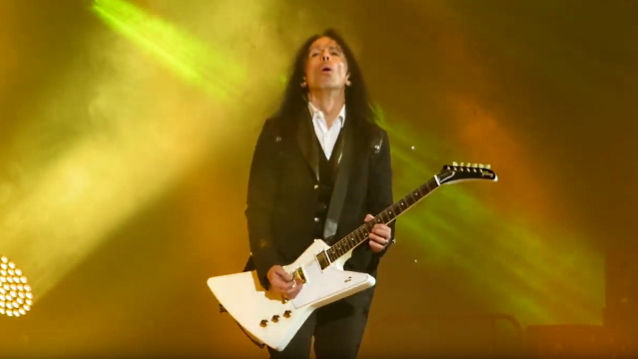 In a recent interview with Cameron Buchholtz of the Oklahoma City, Oklahoma radio station Rock 100.5 The KATT, TRANS-SIBERIAN ORCHESTRA guitarist Al Pitrelli discussed whether there is pressure on keeping the holiday rock touring extravaganza "fresh" after over two decades.

"I don't know that there's real pressure," he said. "This is what the organization has done from the jump. [Late mastermind/founder] Paul O'Neill wanted to outdo himself every year and that became the norm. I don't think any of us know any better other than 'Let's be better than last year.' I don't think it's any different than say, a Super Bowl football team. Okay, you won the Super Bowl. It's awesome. Everybody high-fives and you take a couple of weeks off, but now you got to outdo yourselves next year. There's no guarantee that you're going to do it again so you work real hard yearlong and just keep focused on what it is we do, which is putting on great shows."

Pitrelli then went on to share how O'Neill's 2017 death has affected TSO's overall organizational structure. "His wife and his daughter have been there with him from the jump," he said. "They basically are steering the ship; they're guiding the ship. Everybody else's job has pretty much remained exactly what it was when Paul was still with us. Everybody knows their responsibilities; everybody knows what has to get done. But knowing that his wife and his daughter are there… Paul wanted this to live forever. He and I would talk all night long or in between takes in the studio or when we were out on the road together, that he used to say, 'Al, I want TSO to long live past all of us.' Once again with his family steering the ship, I think that's being accomplished.

"Christmas Eve And Other Stories" is based on the triple-platinum album of the same name and follows a story by O'Neill. In keeping with the classic line "If You Want To Arrange It, This World You Can Change It," the story is set on Christmas Eve when a young angel is sent to Earth to bring back what is best representative of humanity. Following favorite TSO themes of "strangers helping strangers" and "the kindness of others," "Christmas Eve And Other Stories" takes listeners all over the world to help reunite a young girl with her distraught father. The album and tour feature such fan favorites as "Ornament" and the epic "Old City Bar", both of which have not been performed live in recent years. The rock opera also features such TSO classics as "Christmas Eve/Sarajevo 12/24", "O' Come All Ye Faithful", "Good King Joy", "Promises To Keep" and "This Christmas Day". Additionally, the tour will enjoy a new second set containing some of TSO's greatest hits and fan pleasers, including "Christmas Canon", "Wizards In Winter" and many more.