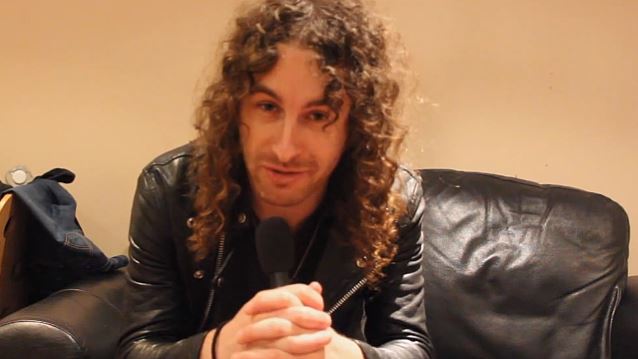 Vocalist/lead guitarist Joel O'Keeffe of Australian hard rockers AIRBOURNE took part in a Hit The Floor "Firsts" question-and-answer session. He discussed his first childhood memory, how METALLICA made him jump off a roof and why he was throwing up in someone's garden at the age of thirteen. Check out the clip below.

AIRBOURNE recently signed a worldwide deal with Spinefarm Records. The band is tentatively scheduled to release its fourth album later this year.

"We're pumped up to have signed on the dotted line to the world's toughest and truest hard rock label, Spinefarm," said AIRBOURNE in a statement. "We have worked with some of the guys on this team in the past, and we're extremely confident about having each other's back in the trenches for many hard rockin' years to come. We're chompin' at the bit to get ROCKIN' and KICKIN' ARSE in 2015 & beyond."

Added Spinefarm general manager Jonas Nachsin, who previously worked with the group as Roadrunner president: "We are so proud to be the new global home for the amazing AIRBOURNE! They are a band who have thrilled audiences around the world with their insanely energetic live shows and wildly anthemic songs, and all of us at Spinefarm are thrilled to be part of their ensuing juggernaut."

Daniel Lieberberg, senior vice president, Universal Music Germany, stated: "Germany, Austria and Switzerland have always been strong markets for this unique band. We're excited to closely collaborate with Spinefarm Records on our mission to bring AIRBOURNE to a new level in our part of the world."

Driven by a formidable work-hard/play-hard ethic, and keen to entertain on the grandest of scales, this award-winning quartet has been proudly walking the rock and roll path since their early teenage years, inspired by the music's great and glorious past, yet determined to move things forward on a wave of blurred limbs & boundless energy.

Led into action by brothers Joel and Ryan O'Keeffe (vocalist/lead guitarist and drummer, respectively; the lineup is completed by David Roads on guitar and Justin Street on bass), the four have spent the past 10 years establishing themselves as a true force of nature — living on the road, selling out major venues, charting albums and appearing on bills with some of rock's most legendary names, from IRON MAIDEN to THE ROLLING STONES.

With AIRBOURNE, everything is to the hilt, which means that frontman Joel O' Keeffe is as likely to be climbing the lighting rig or going "walkabout" in the venue as positioned behind the mic; it also means that their three studio albums — "Runnin' Wild" (2007), "No Guts. No Glory" (2009) and "Black Dog Barking" (2013) — are home to some of the most rousing rock anthems of the past few years, songs like "Too Much, Too Young, Too Fast", "No Way But The Hard Way", "Live it Up" and "Runnin' Wild" itself — a body of work that hasn't escaped the notice of AC/DC's Angus Young, who was recently asked in an interview what he thinks of modern rock music and he said, "I see it as healthy, because there's newer stuff coming through. I really like AIRBOURNE."