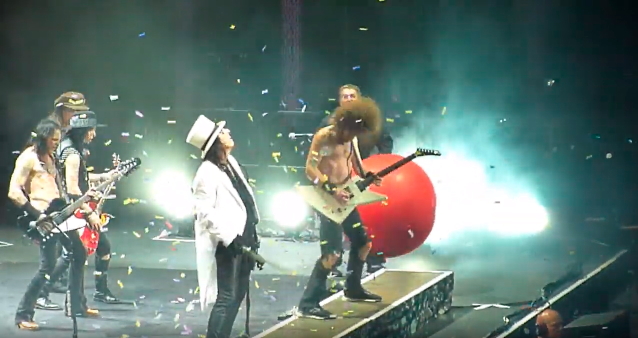 Joel said: "Bloody hell, I'm still buzzing my brains out from 'School's Out' with The Coop! He's so gutsy, I'm in awe of him every night just trying to learn as much as I can from his rock 'n' roll Masterclass he's been slaying Australia with. So when he asked me to jump up, naturally I said, 'Hell bloody yes. I'd be honored, mate!,' whilst trying to hide the fact I was exploding with white hot nerves of fear to not let The Master down. I just said to myself, 'Joel, if you fuck up even just one note, your head's coming off in his guillotine.'"

He added: "If The Coop asked me to guillotine my own head off for him, I would. I have the utmost absolute respect for the rock 'n' roll pioneer!"

AIRBOURNE will embark on the first North American tour in support of its latest album (and fifth overall) "Boneshaker", out now via Spinefarm Records. The spring tour kicks off April 20 in New York City and concludes on May 23 in Montreal. The trek includes appearances at several major rock festivals, such as Sonic Temple and Epicenter.

"Boneshaker" was released last October via Spinefarm Records. The cover artwork for the disc is a collaboration between Matt Read of Combustion Ltd., and Sean Tidy of Design House Studio Ltd.