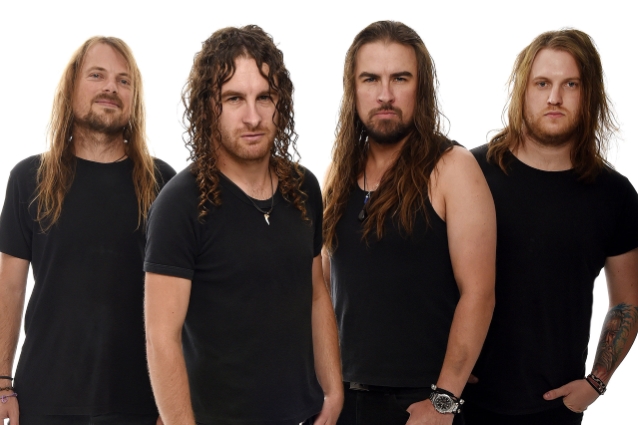 Australian hard rockers AIRBOURNE have completed work on their fifth album for a late 2019 release via Spinefarm. The follow-up to 2016's "Breakin' Outta Hell" was recorded at RCA Victor Recording Studios in Nashville, Tennessee.

AIRBOURNE has a number of European festival appearances scheduled for this summer before embarking on a European headlining tour at the end of September.

In September 2017, AIRBOURNE released "Diamond Cuts" via Nettwerk. The box set was made available in limited-edition vinyl and CD formats, containing the band's first three discs — "Runnin Wild", "No Guts. No Glory." and "Black Dog Barking" — along with the brand new "Diamond Cuts - The B-Sides" collection featuring two previously unavailable tracks ("Money" and "Heavy Weight Lover") plus a bonus DVD of the brand new band documentary, "It's All For Rock 'N' Roll", housed in a slipcase box including original "Diamond Cuts" artwork.

Two years ago, AIRBOURNE parted ways with guitarist David Roads and replaced him with Harri Harrison (PALACE OF THE KING).

"Breakin' Outta Hell" landed in the Top 10 in both the U.K. and Australia after its September 2016 release.