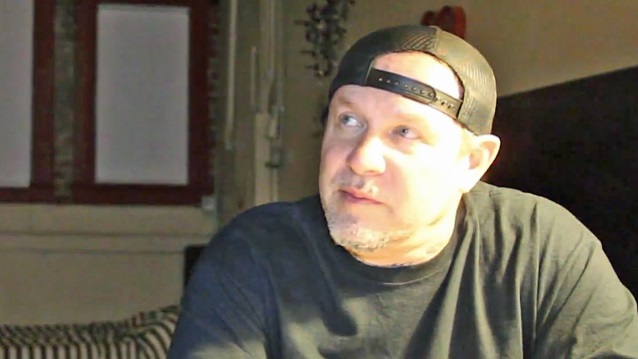 The Jimmy Cabbs 5150 Interview Series conducted an interview with frontman Roger Miret of New York hardcore veterans AGNOSTIC FRONT prior to the band's December 9 concert at Characters Sports Bar in Pomona, California. You can watch the entire chat below. A few excerpts follow (transcribed by BLABBERMOUTH.NET).

On the environment of New York City in the early '80s:

Roger: "Out of all that horrific ugliness and those dark ages, look at all the great shit that came out of it, all the great stuff that came out of New York, just in general, like your Andy Warhols, your art, your music. It was a really dark, grey area, but it was just something amazing in a creative way that really just sprouted all these bands and all kinds of stuff and a lot of it had to do with the 'Reaganomics' years."

On critics overlooking AGNOSTIC FRONT's standing in the punk and hardcore community in spite of the wide-ranging influence of their 1984 "Victim In Pain" full-length debut:

Roger: "For some reason, they just want to skip and overlook my band or bands from that little, tiny era. They'll give us credit for a couple big ones, the MISFITS or it jumps to whoever else they jump to. But 'Victim In Pain', 1984, it was something else. Just like you said, I wanted to bring everyone united, I wanted to get everyone to stand together to fight oppression together because we were just doing that, fighting oppression, but it didn't make any sense, doing it divided. It was about getting people together, like 'Hey, let's do this together. Let's move forward.'"

On whether he thinks the false accusations of AGNOSTIC FRONT being fascist has hurt the band's credibility:

Roger: "I was thinking about this the other day, funny you bring this up. We're that band that people wanted to see just go down in some way or somehow, but you know what? We've fucking never went down because the people that knew us and met us and you know, came to our shows and were a part of it, realized that this is something genuine, this is bullshit that other people are trying to bring this thing down, when this thing is a force of power that is trying to do the right thing. We're totally the crucified band of anything. We're the band that everybody wants to destroy and here we are today. You could destroy us and you won't. We're talking about real shit. Just think about it, let's talk about SEX PISTOLS, for example. It's all about getting the name spelled right and getting it out there. But if the SEX PISTOLS were a band today, they were an incredible band in 1976, groundbreaking, changed music, revolutionized music, now today, if they were a band, tomorrow they would be destroyed. The Internet would just destroy them. We come from an era where politically incorrect was correct. And today it's fucking hard as fuck."

On representing what New York City is truly about:

Roger: "Absolutely. If you read and look at my lyrics in 'Victim In Pain' and 'United Blood' and go to New York City, you'll be like 'What the hell is this guy talking about?' It's not my party anymore. Those parties still exist. Those lyrics are still relevant in other places all over the world. You go to Russia, go to South America, the people are still living that hardcore oppression. You know what happened in New York City is what's going on in every city is gentrification. They used the punk scene to gentrify the fucking areas and they all moved in and that was it."

On what inspired him to write a book, "My Riot: Agnostic Front, Grit, Guts & Glory":

Roger: "It's been going on since 1999. I finally figured out I had to get it done. That's it. I had to just get it done. The truth is, the biggest inspiration for me to finish this book were my children. I did it for them. It was important for them to know the struggles. They have a good life. They live in a suburban home and it's not New York City, they're not squatting, they're not in a van, they're not dealing with gangs. They have no idea of what any of that is. I just want them to know their father struggled as an immigrant coming from Cuba to America, all the stuff I had to deal with to move forward to where they are today. I want them to understand and most important, their kids and then their grandkids. I wanted to leave my story there for them to know pretty much the struggles of us to have this American dream or whatever you want to call it."

"My Riot: Agnostic Front, Grit, Guts & Glory" — written by Miret with Jon Wiederhorn (also known for his book titled "Louder Than Hell: The Definitive Oral History Of Metal") — was released on August 29 via Lesser Gods.