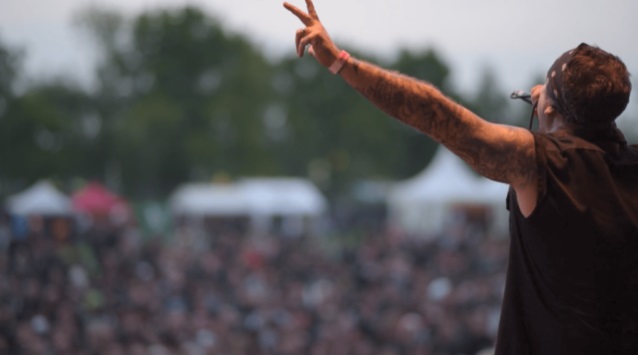 A trailer for "The Godfathers Of Hardcore", a brand new documentary about New York hardcore legends AGNOSTIC FRONT, can be seen below.

The film, which was directed by Ian McFarland, is scheduled to have its world premiere at this year's Doc NYC festival on Saturday, November 11.

Roger Miret and Vinnie Stigma are lynchpins of New York hardcore, and their band AGNOSTIC FRONT played a key role in defining, shaping and establishing the cultural code of conduct for the still-thriving movement.

Film and music video director Ian McFarland (MESHUGGAH, KILLSWITCH ENGAGE, FEAR FACTORY) has crafted an intimate portrait of the two industry leaders, two of the most respected individuals in the 35-year history of hardcore punk music. In addition to inspiring and nurturing multiple generations of bands that followed their lead, Miret and Stigma have remained close friends through great adversity that sometimes threatened their very existence.

As a part of a potent subculture, AGNOSTIC FRONT probably will never sit beside AEROSMITH and THE BEATLES in the Rock And Roll Hall Of Fame. Nor have they been showered with platinum records or the rock and roll riches reserved for acts that value popularity over integrity. Miret and Stigma are perfectly happy with the niche they've carved for themselves, and the effect they've had on an entire subgenre that had infiltrated both the counter-culture and impacted the mainstream. A recent article in the New Yorker about hardcore music quoted was named "United Blood," after AGNOSTIC FRONT's first album. The band continues to play major slots on high-profile international festivals and their recently released album "The American Dream Died" has earned the band some of its strongest reviews in years.

AGNOSTIC FRONT's past legacy is perhaps even more praiseworthy than their present accomplishments. The movement the band pioneered has had a profound effect on millions of fans and musicians, as well as skateboarders, bikers and other individualists who refuse to accept the status quo. In a landscape of increasing apathy and complacency, the messages AGNOSTIC FRONT presents are as relevant today as they were in the '80s when the band members were impoverished, scrappy and ambitious, often fighting for their very survival as well as the perseverance of their volatile but highly inspirational band.

Back in the '80s, Miret and Stigma roamed the dangerous streets of New York City's Lower East Side, fighting those who got in their way and laying down the gauntlet for the music they believed in and were willing to defend with their lives. At the time, they had no idea that the band that meant the world to them and the culture populated by runaways, street kids, punks, skinheads and other social misfits would also resonate with a generation of other music fans and musicians, including METALLICA's Kirk Hammett, ANTHRAX's Scott Ian and PANTERA's Philip Anselmo, not to mention CREMASTER's Mathew Barney and electronic guru Moby.

Miret, 53, a Cuban refugee from an abusive home and Stigma, 61, a second-generation true-blue New York Italian, found each other on the rough streets of New York City in the early 1980s, becoming fast friends and developing an unbreakable bond. Together, over the next three decades, they became the "Godfathers Of New York City Hardcore" — creating a vehicle through which three generations of fans could grow, scream and band together as one in the face of diversity, violence and discrimination. Through the strength and bonds of brotherhood, Roger and Vinnie birthed something larger than themselves — they birthed a revolution.

Along the way, they experienced some of the most harrowing blows a band can endure, including various lineup changes, Roger's incarceration and the subsequent collapse of the band. After Roger was released in the late 1990s from New York's Wallkill correctional facility, Roger and Vinnie reunited, picking up right where they left off. Still touring and recording today, AGNOSTIC FRONT is the very embodiment of hardcore: endurance, perseverance, brotherhood, strength against oppression and the will to keep going, obstacles be damned.

Today Roger and Vinnie are moving into their 50s and 60s, have jobs and families and are gearing up to begin a new touring schedule that will take them all over the world. This film serves as an up-close-and-personal look into the lives of these different but inseperable musical icons, and in the process illustrates the tenacity, optimism and enthusiasm with which they both approach their band.

Miret and Stigma have survived in an ever-changing music scene because they refuse to compromise. From day one, they took on the system with fists clenched, and while they've aged over the decades, they've maintained the power and youthful — if not as destructive — mindset they had in their youth. At the end of the day, they remain wholly united in blood.

To learn more about the film, go to godfathersofhardcore.com.