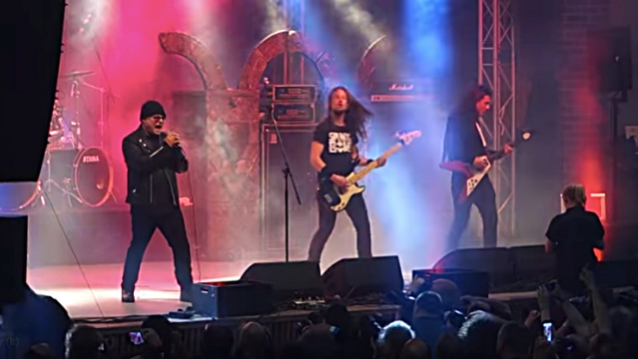 According to an Instagram post by Underground Empire, AGENT STEEL's performance started later than originally scheduled "because of a traffic jam." The band was slated to play for a full hour.

Earlier today, AGENT STEEL posted a photo of last night's show, along with the caption: "Germany truly was a phenomenon, but only the very beginning..." This caused several fans to respond in disgust, with one writing: "A phenomenon? Your performance at Keep It True was so bad that the show tomorrow was canceled by the venue. Congratulations for ruining the name of Agent Steel..." Another fan chimed in: "How can you write such fake informations? I really hope it was a wrong night because if this is your average show, I think there's something wrong." In the same thread, three other fans complained about the apparent cancelation of AGENT STEEL's previously announced concerts in the Netherlands.

Earlier this year, Cyriis and his new bandmates announced that they were working on a new album, titled "8 Lights Protocol", tentatively due before the end of the year.

Cyriis returned to the group in 2010 after a 23-year absence and performed at the Thrash Domination festival in Tokyo. The singer's appearance with AGENT STEEL at Keep It True festival in Germany in April 2011 was canceled. Instead, the rest of the bandmembers performed under the moniker MASTERS OF METAL with replacement singer Rick Mythiasin (STEEL PROPHET). The band played with Cyriis fronting the band again at the 2011 edition of the Sweden Rock Festival.

Germany truly was a phenomenon, but only the very beginning...

To clear up the rumours: AGENT STEEL will be late because of a traffic jam. This is the new running order for today.