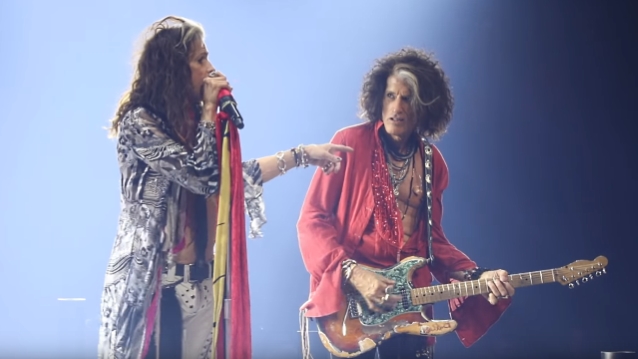 Perry said his 2016 collapse was caused by "over-the-top fatigue," while his hospitalization after the Billy Joel concert happened because he "couldn't get my breath and I had to sit down. The next thing I know I'm getting oxygen. They call it COPD [chronic obstructive pulmonary disease]. It's caused from smoking for years.

"I quit smoking," he added. "I haven't had a drink since that night. I'll be around for a while."

Perry's VAMPIRES bandmate Alice Cooper told Rolling Stone that Joe was exhausted when he fell ill at the 2016 gig, and had not eaten in two days.

AEROSMITH kicked off its "Deuces Are Wild" Las Vegas residency in April. The band is scheduled to play 17 more shows in Las Vegas dates before the end of the year — four in September, four in October, seven in November, and two in December. The band also has multiple-night "Deuces Are Wild" engagements booked at MGM properties in National Harbor, Maryland; Atlantic City, New Jersey; and Springfield, Massachusetts.

In addition to the "Deuces Are Wild" shows, AEROSMITH is scheduled to make a festival appearance on July 19 at the Twin Cities Summer Jam in Shakopee, Minnesota.