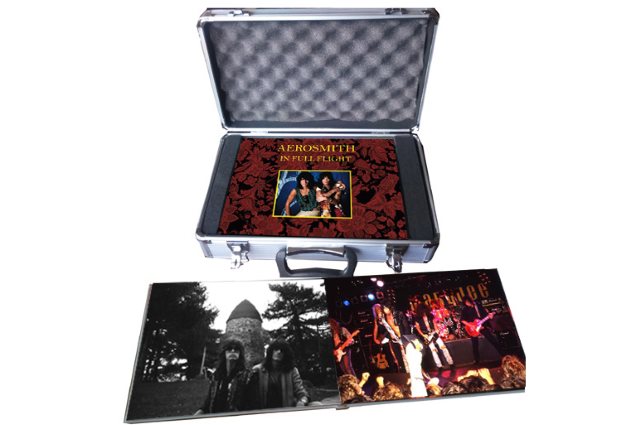 Wymer Publishing has set a November 30 release date for "Aerosmith In Full Flight", a pictorial document as seen through the lens of British photographer Tony Mottram.

Tony photographed the band over many years for various magazines. As was often the case, only one photo ever got published. In the fast-moving world of weekly magazines, sometimes entire sessions would be done and left undeveloped.

Tony started shooting AEROSMITH from toward the end of the period with Jimmy Crespo and Rick Dufay and onwards through the return of original members Joe Perry and Brad Whitford that resulted in the albums "Done With Mirrors", "Permanent Vacation" and "Pump".

As well as featuring photos of the band shot several times in England, this collection includes images from a session at the band's rehearsal room in Boston. Littered throughout is a mixture of live and offstage photos, including a selection of photos taken at London's famous Marquee club when they were joined on stage with Jimmy Page.

This limited-edition hardback book, presented in a flight case, is an opportunity to own a unique selection of photos, most of which have never seen the light of day before.

Earlybird subscribers who order by October 31 will have their name printed within a dedicated page in the book.

According to Wymer, "Aerosmith In Full Flight" has not been authorized or approved by AEROSMITH or the band's management.