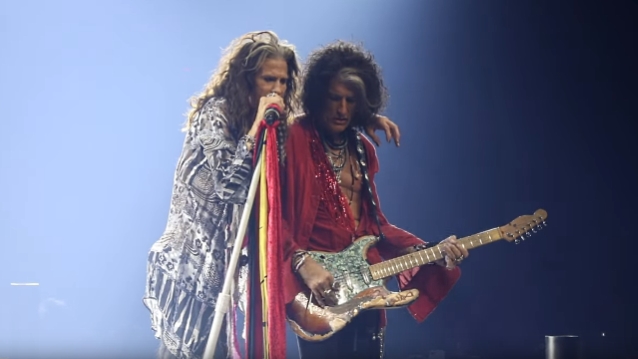 AEROSMITH has released a video of the "Movin' Out" performance from the band's April 23 concert as part of the "Deuces Are Wild" Las Vegas residency.

"Movin' Out" was the first song that Steven Tyler and Joe Perry wrote together — while sitting on a water bed at AEROSMITH's Boston apartment — and it is a standout cut on the group's 1973 debut album.

AEROSMITH wrote in an accompanying caption: "50 years of AEROSMITH history in one special moment. From the first song ever written, to the Las Vegas strip and we ain't done yet!"

AEROSMITH has teamed up with THX and L-Acoustics for the residency at Park Theater to deliver the world's first THX Certified live performance presented in L-ISA Immersive Hyperreal Sound.

AEROSMITH is scheduled to play 26 more shows in Las Vegas dates before the end of the year — five in June, four in July, four in September, four in October, seven in November, and two in December. The band also has multiple-night "Deuces Are Wild" engagements booked at MGM properties in National Harbor, Maryland; Atlantic City, New Jersey; and Springfield, Massachusetts.

In addition to the "Deuces Are Wild" shows, AEROSMITH is slated to make two festival appearances this summer: July 14 at the Roxodus Music Fest in Edenvale, Canada; and July 19 at the Twin Cities Summer Jam in Shakopee, Minnesota.