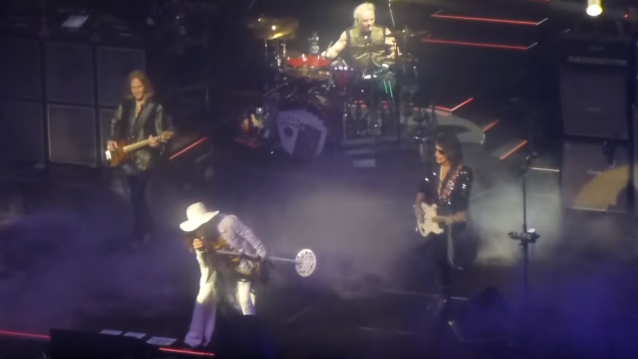 AEROSMITH kicked off its "Deuces Are Wild" Las Vegas residency Saturday night (April 6). Prior to the band's performance at at the Park Theater at Park MGM, a half-hour documentary was shown to attendees, featuring interviews with members of AEROSMITH, along with various other artists and celebrities.

AEROSMITH's 16-song set included early classics such as "Mama Kin", "Back In The Saddle" and "Sweet Emotion" as well as later hits such as "I Don't Want To Miss A Thing" and "Dude (Looks Like A Lady)". The show concluded with "Dream On" and "Walk This Way".

Grammy Award-winning producer Giles Martin, known for creating the soundscape for "The Beatles Love" by Cirque du Soleil show in Las Vegas is working on the show as producer.

AEROSMITH teamed up with THX and L-Acoustics for the residency at Park Theater to deliver the world's first THX Certified live performance presented in L-ISA Immersive Hyperreal Sound.

AEROSMITH will play 34 more shows in Las Vegas dates before the end of the year — eight in April, five in June, four in July, four in August, four in September, four in October, seven in November, and two in December. The band also has multiple-night "Deuces Are Wild" engagements booked at MGM properties in National Harbor, Maryland; Atlantic City, New Jersey; and Springfield, Massachusetts.

In addition to the "Deuces Are Wild" shows, AEROSMITH is scheduled to make two festival appearances in July: July 14 at the Roxodus Music Fest in Edenvale, Canada; and July 19 at the Twin Cities Summer Jam in Shakopee, Minnesota.