Venezuelan newspaper El Universal reports that legendary rockers AEROSMITH have cancelled their previously announced February 1 concert in Caracas as part of the three-day Solid Fest. According to Solid Show Producciones, which is responsible for organizing the event, the show was "postponed" because AEROSMITH guitarist Joe Perry fractured his knee in an accident in Boston (where the band was rehearsing for the show) and had to undergo emergency surgery. He was apparently advised by doctors to refrain from performing for three-to-four months in order to ensure that his knee is properly healed.

AEROSMITH drummer Joey Kramer posted a message online on January 5 saying that the band is ready to resume work on its next studio album. Kramer wrote, "Today is the first day Tom (Hamilton, bassist) and I are getting back together. We just rehearsed for two hours and it feels so good! We can't wait to get back into the studio and get back out on the road to do what we do best."

AEROSMITH began working on its 15th studio album last year, but put the project on hold for a while as medical issues sidelined several members of the group.

A release date has yet to be revealed for the new record, although it's tentatively slated to come out sometime in mid-2009. 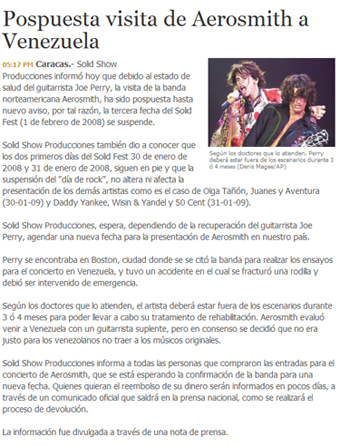