AEROSMITH has canceled its two previously scheduled festival gigs in the Far East — Wednesday, August 21 in Shanghai and Saturday, August 24 in Taipei — due to the local promoters' failure to "meet contractual obligations."

AEROSMITH was supposed to make its Chinese live debut at the outdoor Shanghai Hongkou Stadium. The venue has a capacity of 25,000 people.

"We are extremely upset to have disappointed our dedicated fans," says AEROSMITH singer Steven Tyler in a statement. "They have welcomed us into their country, and due to uncontrollable circumstances, we will not be able to perform. We were so excited to share our music with them and look forward to one day returning and giving them the show they deserve."

"We're disappointed as we wanted to play for our fans," added AEROSMITH guitarist Joe Perry. "We've looked forward to this for a lifetime."

"I'm disappointed we weren't able to play for our fans in China. However, the circumstances were beyond our control," stated AEROSMITH drummer Joey Kramer. "I sincerely hope AEROSMITH will get another opportunity to come back to Shanghai and Taiwan to play for our many fans there."

Back in May, AEROSMITH a concert in the Indonesian capital of Jakarta due to reports of a bomb threat at the Myanmar Embassy.

AEROSMITH's latest album, "Music From Another Dimension!", was released on November 6, 2012, and debuted at No. 5 on The Billboard 200 chart, selling 63,000 copies in its first week of release. 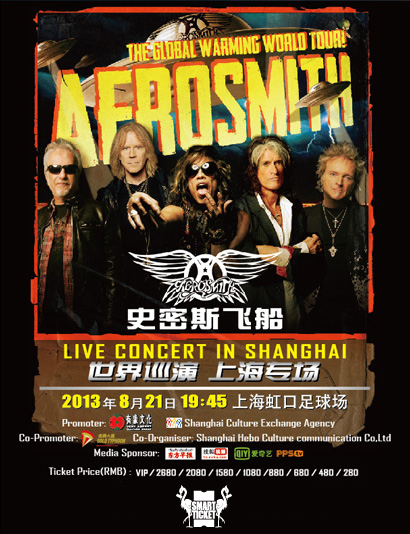